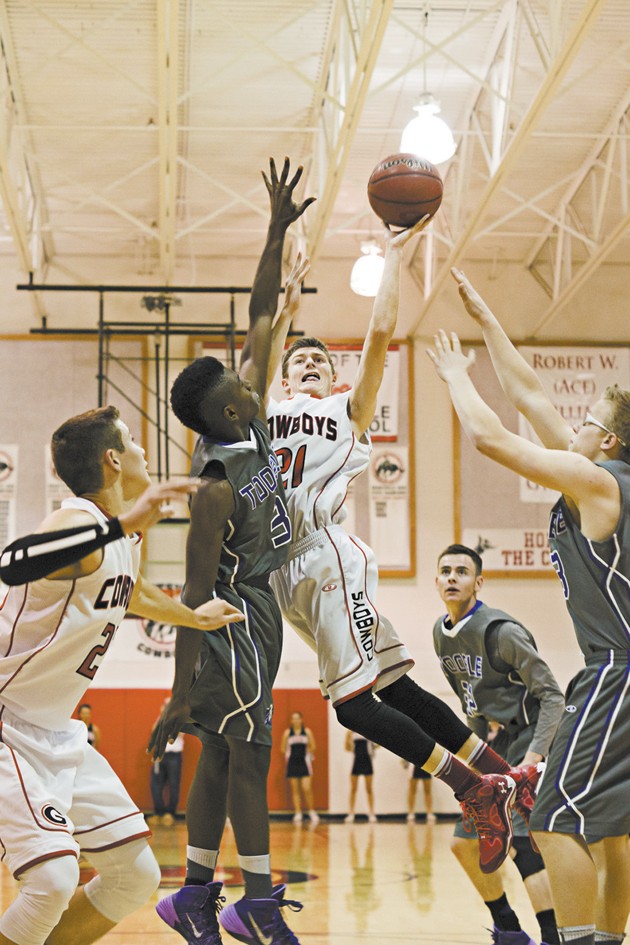 This is a file photo from Grantsville’s game against Tooele with Dallin Williams going up for a shot. In the game against Bear River, the Cowboys found each other with their passing for 16 team assists to win 69-49.

If Grantsville wanted to make a statement, Region 11 can now hear it loud and clear.

The Grantsville Cowboys traveled to Garland on Friday and dismantled the first place Bear River Bears 69-49, moving into a tie with Bear River in the chase for the region championship.

“We’re just good — the bottom line,” said GHS head coach Chris Baker. “These kids don’t doubt. When you can hang your hat on rebounding and defending and then just have guys step up at different times, they believe they can go beat anybody. They’ve got the opportunity to win the region championship now, which is something that hasn’t been done in a long time.”

The Cowboys’ third consecutive win of 20 points or more came because the players believe in being unselfish and doing things for each other, said Dallin Williams.

“We’ve really bought in to a team effort instead of one individual guy,” Williams said. “We’re just playing well. We’re passing the ball everywhere. It’s just so much fun because you know that anybody can score at any time.”

“They got us a little bit with that zone the first game,” Williams said. “We worked on that a lot, and now we’re hitting shots and playing well.”

The Cowboys finished the game with 16 team assists, which contributed to more than half their points. They set the tone for the passing exhibition right at the start when Williams dished a pass over to Devon Arellano, who knocked down a 3-pointer in the first 10 seconds of the game. Arellano then came down on the next possession and found Devin Adams, who banked in a shot. Then Arellano found Williams, who sank his own 3-pointer for an 8-0 lead. The Bears called timeout, but the Cowboys were already off to the races.

“They deserve all the credit,” Baker said of his players. “They’ve worked so hard. We have leadership that’s unbelievable. We’ve got kids who buy into everything. I couldn’t be more happy for any of them because it takes time to build a program, and we’re there. I want them to enjoy it. It’s about making great memories.”

The top scorers for Grantsville were Adams with 17 points, Williams 15, Nick Arbon 10, Arellano eight, and Aaron Harrison and Spencer Lawrence with seven each.

The Cowboys still have four games remaining, including three region games and one non-region game against another region leader, Morgan. Grantsville plays against Morgan on Wednesday in a potential preview matchup with the possibility the two teams could face each other in a few weeks at the state tournament.

“Wednesday is going to be a big one,” Baker said. “I set that up knowing that we were going to be this (good). It’ll prepare us for that state tournament a little bit.”

Williams said he and his teammates will be able to keep themselves focused because they want to be successful for each other.

“I love those guys,” Williams said. “We’re all brothers. None of us have any drama. We just play for each other.”