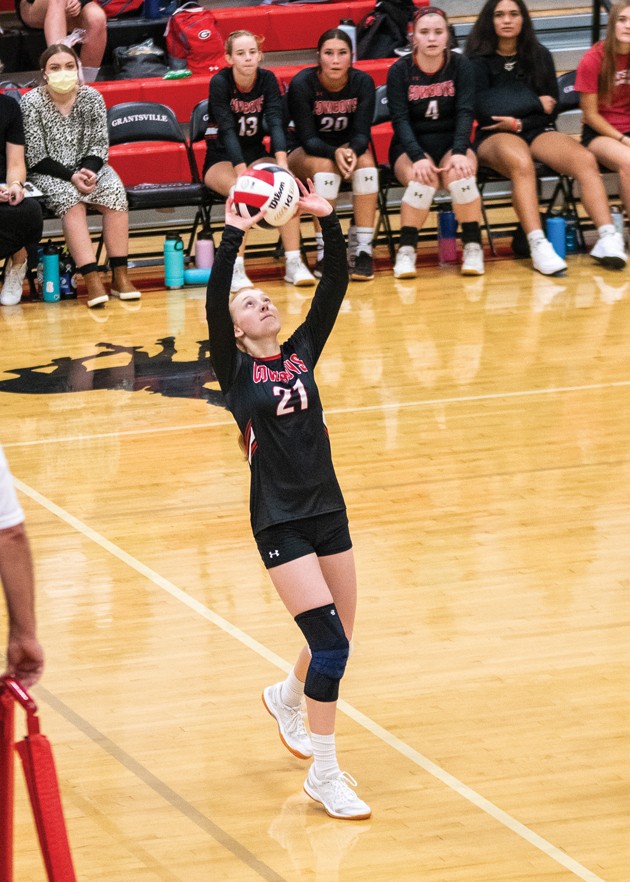 Grantsville’s Kaitlyn Nordgren sets the ball in a match against Juab. The Grantsville volleyball team is 5-10 overall and 0-3 in Region 13.

On Thursday, the Cowboys opened slowly against Morgan but gained momentum and confidence in the second game before falling in the third set to lose the match 3-0.

In the opening set, Grantsville fell behind early 3-8 as they adjusted to the Trojans’ tall attackers and blockers out of the middle. Morgan expanded the lead to 6-16 before the Cowboys cut it to eight at 9-17 with a kill and two aces by Broadhead. The Trojans’ middle attack and some well-placed tips expanded the Morgan lead as they took the first set 25-11.

The teams volleyed back and forth as the Cowboys played some of their best volleyball of the season, matching Morgan hit-for-hit and block-for-block. Behind the strong serving of Berrett, Grantsville took a 17-16 lead. The Trojans reclaimed the lead on a dump set and kill out of the middle as they went on to score nine points to the Cowboys’ one and claimed set two 25-18.

In game three, Morgan took the momentum from the end of the second game and steadily led throughout the match.  An ace by Berrett leveled the score at 2-2, but the Cowboys were unable to take the lead the remainder of the game and lost 13-25.

Stats from the Morgan match register Ware as the top hitter with five kills and Broadhead following with four and Castagno tallying two. Berrett and Nordgren both recorded three aces on the night while Broadhead added two. Ware served nine balls with no errors and recorded three blocks.  Rounds and sophomore Aliyah Fernandez each had two blocks with Broadhead, Castagno, and Nordgren adding one each.  Berrett led with six digs while Allred added four and Broadhead three. Smith put up four assists and Nordgren three while Allred, Berrett, Broadhead and sophomore Ava Kelley managed the serve receive duties recording 16, 10, 9 and 9, respectively.