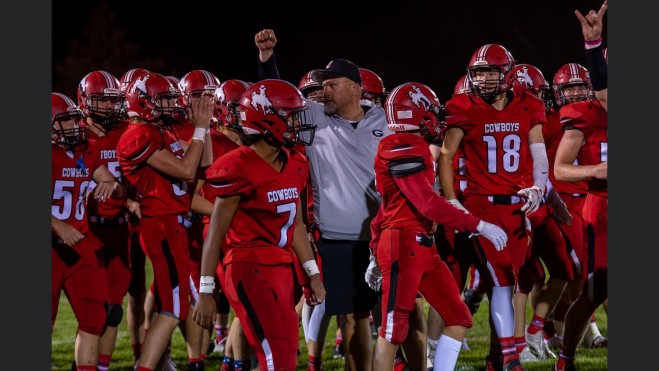 Following a winning season, especially a championship-winning season, there aren’t too many discussions on what needs to be improved for the next year.

After besting Morgan High School last November to take home the 3A state title, Byrd said the achievement stopped there. With this year’s team, his objective is to treat the upcoming season as if nothing was accomplished.

“That was last year’s team — (now) it’s a brand new team, brand new situation,” Byrd said. “We have to outwork everybody still and work even harder, because now we have a target on our backs.”

Coming off a 10-3 record, including a regional record of 4-1, the Cowboys will see changes to several key positions most notably quarterback Caleb Sullivan, who will no longer be at the helm after graduating last spring. The changes won’t give reason for concern, according to Byrd, as most of the returning starters have ample time playing at the varsity level.

“We do have a lot of experience coming back, but just a couple of key spots we need to replace,” Byrd said. “I think we have some good kids that can do a good job of replacing them.”

In the face of any changes, the Cowboys’ approach is to stick to the fundamentals while also exercising flexibility to accommodate the newcomers.

Having this mentality helps Byrd instill a sense of cohesion among his players. By allowing them to hold each other accountable on the field, he contends the team plays as one unit and strives for results as such. Byrd points to last year’s squad as an example of how togetherness leads to positive outcomes.

“They just cared about the team, they didn’t care who had the success,” Byrd said. That was the biggest strength because that probably wasn’t our most talented team.

“So that’s what I’ve been preaching to the kids: if you play for each other you have greater success,” Byrd said.

Looking ahead to the season, Byrd expects to see his defense maintain its competitive edge and his offense to bring just as much intensity each game.

“I think we’ll have an elite defense again (and) our offense should be exciting,” Byrd said. “We have some really talented receivers, running backs and I think our quarterback is going to tie it all together.”

The Cowboys will hold a scrimmage on Friday night at 7 p.m., ahead of its season-opener against Provo on Friday.

This story was corrected to reflect that the Cowboys’ scrimmage game is on Friday night.