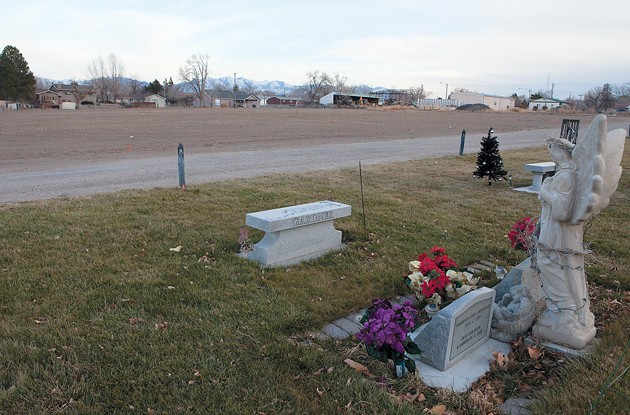 Grantsville City Cemetery now has clearance from the zoning commission to expand to the adjacent lot to the east. There will be 605 burial lots available in the new area.

Grantsville City Mayor Brent Marshall, speaking on behalf of the city, requested the permit, and said the property was purchased largely with the expansion in mind.

“The property owned by the Wooten family was purchased by the city to expand the cemetery to the property to the east,” he said.

The city purchased the property in October 2013 for $82,000 with spoken plans to use it as an expansion for the cemetery and maintenance yard.

A total of 605 burial lots will be sold on the property, which is roughly 12 years of typical cemetery growth for the city, Marshall said.

The expansion will adjoin with the current property but will have an access road from Clark Street only, rather than having a street go through from Clark to Main Street.

A portion of the property will also be used for the city’s maintenance area, Marshall said.

A privacy fence and shrubbery will be installed around its perimeter, particularly where it borders yards of nearby private residences, he added. The expansion also has utility easements for sprinklers and trees.

Before the purchase of the lot, the city’s cemetery expansion plans had rested across Clark Street in a portion of the Clark Historic Farm, which had been purchased by the city in the 2000s and partially designated as a future cemetery in 2010.

A statement from the Friends of the Clark Farm applauded the move, in part because it takes the heat off the Clark Historic Farm as the only option for the expansion of the fast-filling Grantsville City Cemetery. The statement also urged the city to use the entire 3.1 acres for the cemetery expansion, rather than also using it for city sheds.

“While we are pleased with the decision to use this portion of the Wooten land for a cemetery, we feel the right thing would be to include the entire piece for a longer-term solution,” the group said in the statement.

“Maintenance sheds are not a good use for the rest of the property, which is in the middle of a historic area of town,” they added. “We are concerned not only for the loss of over half the potential burial plots, but also the lost cemetery revenue for using that land to store unsightly equipment. There are better places for maintenance sheds, such as the land the city owns south of town across from the irrigation company.”