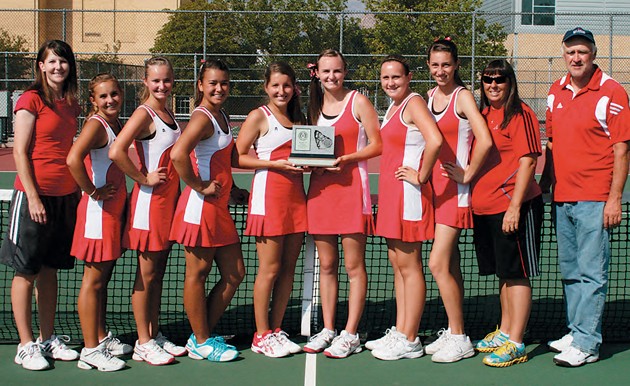 The Grantsville girls tennis team cruised to the Region 11 tennis title Thursday in Ogden by winning all three singles championships and the second doubles title.

The only setback came at first doubles, where it appeared Grantsville also would win in three sets.

“I was really pleased with the way our second doubles team was able to pull out the victory. I didn’t know if they would be able to get past the Ogden team,” Thurgood said. “Madi and Whitney played very well for a sophomore and a freshman and have made great strides in the last couple of weeks.”

All the Grantsville players advance to the 3A state tennis tournament Friday and Saturday at Liberty Park. The first two rounds are set for Friday with the semifinals and finals on Saturday.

“Last year, all our players won in the first round, but nobody got past the first round,” the coach said. “This year our goal is to get our players to the semifinals.” Thurgood said because of good bracketing it looks like all three singles players should have a good shot at making it past Friday and advancing to matches on Saturday.

“We are optimistic, and they are ready to give it their best shot,” he said.

A couple of the players were nursing injuries on Monday from a four-wheeling accident over the homecoming weekend so practice was light. The coach said they should be OK to play on Friday.

The Stallion doubles teams did not qualify, and nobody from Tooele qualified for state.