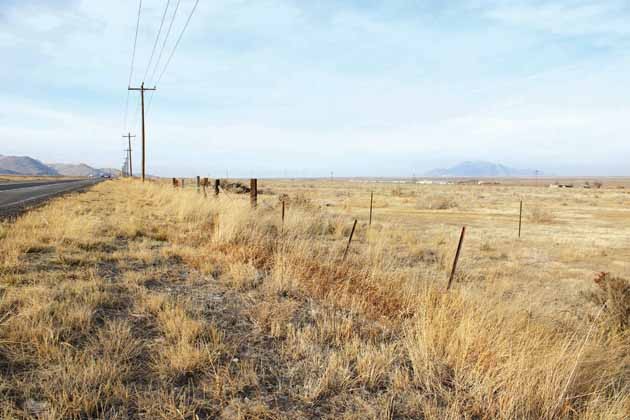 Grantsville City rezoned approximately 155 acres east of Walmart Distribution Center between state Route 138 and Lincoln Highway for commercial, mixed-use residential and other possibilities. A group of Grantsville ctiizens is now challenging that rezone with a referendum petition.

Several Grantsville residents are working to put a referendum on the city’s next ballot, opposing a recently proposed zone change near the Walmart distribution center.

The rezone, which was approved on Jan. 10, is set to impact 155 acres of property between Highway 138 and Old Lincoln Highway. In the original zoning plan, the property was split up into three categories of land management: agricultural, manufacturing, as well as mixed residential and commercial.

For the rezoning plan written into Ordinance 2021-02, the city envisions a mixed use development that includes a gas station, commercial and residential zoning. Mayor Marshall has indicated there is also interest in building a truck stop on the land, ostensibly for drivers traveling to and from the distribution center, as well as other truckers passing through the city.

This plan is concerning for many residents of Grantsville, especially those who sponsored the referendum. One sponsor, Taylor Raths, worries the changes to be enacted would take away from the rural appeal that attracts both locals and transplants alike.

“A lot of individuals who have moved intentionally to the valley are wanting a more rural location to live and to have that lifestyle,” Raths said.

In their joint argument for the referendum’s passing, the sponsors articulated this concern further by saying the rezoning “is not in harmony with the surrounding properties.”

For sponsor Morgan Jaterka, the prospect of any development on the 155 acres is contrary to the farming industry in the area, especially considering the commodities currently available on the land.

“I would like to see it the way that it was before — just a field with sagebrush — so we can use it for agriculture,” she said.

Another source of her concern stemmed a desire by city residents to be more involved in the decision-making process. This sentiment is shared by the other sponsors, who largely feel their opinions were not adequately considered in the process of approving the ordinance.

“I think the city should be fair and provide more information on what their plans are,” Raths said.

Raths says the purpose of the referendum is primarily aimed at informing Grantsville residents who might not be privy to the rezoning components.

“We want the community to be aware that this is happening,” she said, adding the goal is to give residents a voice in the process.

As supporters of the ordinance’s passing, the city released a rebuttal to the argument and insisted that an unchanged zoning would do more harm than the rezone would. In a statement issued on behalf of the Grantsville City government, the group claimed a “no” vote “would allow the landowner to build high-density housing next to large manufacturing enterprises.” They contended Grantsville residents would not be in favor of a manufacturing hub being so close to housing developments.

In a previous comment, Mayor Brent Marshall sought to put locals at ease, saying he wants to “do what’s best” for Grantsville. “This exactly fits our master plan. We cannot stop growth, we can only control it,” he said in an interview for a previous Transcript Bulletin story.

Despite the sentiments of reassurance, the sponsors are taking issue with the city’s handling of public opinion and feel they are effectively ignoring any input. Many have cited a lack of meaningful dialogue between those involved in the decision-making process and farmers and ranchers.

“I feel like the city officials need to listen to the residents of Grantsville,” sponsor Linda Herrera said. “I don’t feel like our voices are heard as much as I believe they should be.”

Other city leaders have pushed back on the notion that Grantsville residents are being left in the dark. Councilman Darrin Rowberry made a statement in January that he and the rest of the city council are keeping the interests of locals in mind.

“Some people think we’ve lost touch and don’t care about Grantsville. We do care and we’re here to help,” he said.

Nonetheless, the group behind the referendum wants to get the word out to as many people as possible.

“We want the community to be aware that this is happening and be able to let them have a voice in this process,” Raths said. She added that outreaching would allow residents to make an informed choice to determine “if that’s the kind of growth they want in their city.”

The group’s outreaching has been conducted through various sources of interactions and across different multiple social media platforms. For those who want to learn more about the referendum, visit Grantsville’s City’s website and click on the link titled “Proposition Information Pamphlet.”

Those who have questions on how to sign the referendum can visit the “Grantsville 411” Facebook group or keep an eye out around town for booths featuring sponsors who will address any questions. Concerns or comments regarding the ordinance can be sent, via email, to cwebb@grantsvilleut.gov. Emails sent prior to 5:00 p.m. will be addressed during the March 3 city council meeting.