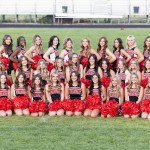 Each week, these athletes display high-flying feats and crowd-dazzling moves which require a great deal of risk. Though it might not look like it on most nights, cheerleading is a contact sport in and of itself. Grantsville High cheer coach Mikaela Butler can attest to the physical toll her girls can take each game.

“It’s not uncommon for one of them to walk away with a black eye or bloody nose, because they’re throwing and catching people.”

Following the team’s first place finish during the sideline freestyle category of the Utah Cheer State Championship last January, the Cowboys cheerleading squad is pumped to ride the momentum throughout the school year and leading up to next year’s competition.

Getting to that point takes dedication and hard work, which typically doesn’t get the recognition other sports receive.

Each school year, the cheer team performs throughout the school year for multiple sporting events. In the fall the squad covers volleyball and football games, then wrestling and both boys and girls basketball in the winter.

“It is a year-long commitment, unlike most high school sports,” Butler said.

Training each summer can also be grueling, which includes morning practices from 6 to 8 a.m. and two-a-days in the weeks leading up to football season. When school is in session, the cheer team attends a cheer class during which they practice their routine.

“They’re athletes, they’re really tough,” Butler said. “I think there’s a perception that it’s all a bows and skirt mentality, and what people don’t see is all the hard work that goes into it.”

Butler constantly praises her squad and says she is impressed by the work the girls put in to bring themselves from possessing limited skills to becoming a championship-caliber team.

“I am proud of the cheerleaders for all the progress they have made over the past two years,” Butler said. “It was so amazing to win a state title last year.”

Likewise, Butler’s cheerleaders sing their coach’s praises and attribute her coaching style to their ability to perform at a high level.

Lyssa Christensen, senior cheerleader, spoke to Butler’s positive attitude and her devotion to the team’s success.

“Coach Butler is one of my favorite people,” Christensen said. “She knows we want to be the best [and] reminds us of that when times are hard.”

Senior Brielle Fawson also complimented Butler on her ability to keep the team motivated and maintain a productive relationship with each of the cheerleaders.

“She never yells and is very good at giving constructive criticism so we can [nail] every performance,” Fawson said. “Overall, cheer is such a positive environment.”

Now that cheerleading is sanctioned as a sport by the Utah High School Sports Athletic Association, the criteria for competitions have changed and teams will no longer be competing for single event titles. Butler said it will take a cumulative score compiled from the four routines, in order to win the championship.

Senior cheerleader Makell Matthews says the team is adapting to the new criteria and readying to take a more holistic approach to next year’s competition. She also echoed Butler’s sentiments regarding the team’s work ethic.

“We are working to take state in more categories [than freestyle],” she said. “The cheerleaders are very hard-working; we are more than just a skirt and bow.”

Another change that will impact cheer teams is the addition of boys volleyball to high school spring sports. Once the season starts in the 2023-24 spring season, cheerleaders will be performing in all three seasons of the school year, including the state competition in the spring.

Looking ahead to January’s state cheer championship, Butler says she expects her cheerleaders to be competitive and hold their own against the other schools across the state.

“I go into it cautiously optimistic since some of the judging is subjective, which can make it difficult sometimes,” Butler said “[But] no matter the outcome, we are making memories along the way and that outweighs any trophy we may receive.”

The cheer squad will be performing during the Cowboys’ next football game against Ogden on Friday at 7 p.m.