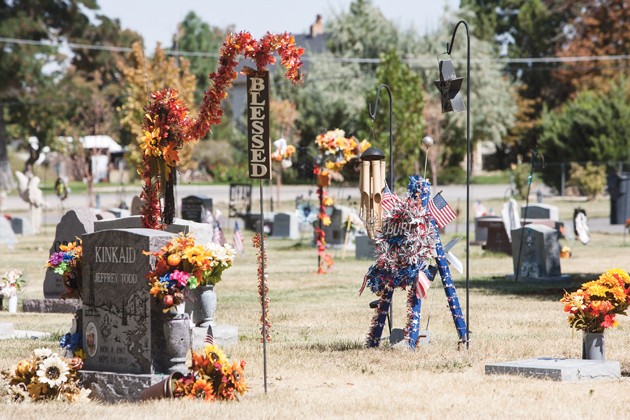 Graveside decorations are to be removed by Nov. 1 ♦

Now Grantsville City is looking to enforce its cemetery city code, which would result in the removal of many of those decorations.

In Mayor Brent Marshall’s monthly newsletter, included in residents’ utility bills, it describes the city’s cemetery code in brief and lets residents know they have until Nov. 1 to remove objects that are not permitted.

“Items left will be removed by cemetery personnel,” the newsletter said. “Thank you for helping our cemetery look its best.”

Among the decorations prohibited by city code are glass or other breakable containers, any objects not kept on the headstone, or any objects that “become faded, worn, weathered, or otherwise unsightly.”

The code also makes it unlawful to plant shrubs, trees, flowers or other plants; it is similarly unlawful to place decorative stones, place monuments or markers, or any permanent structures upon any cemetery lot without approval from the city.

Wires, sticks, pegs, pinwheels and iron rods are also prohibited in the cemetery.

There are exceptions to the city’s cemetery policy on decorations, but they are limited to the week following the burial on a lot and for Memorial Day weekend.

Marshall said the reaction he has received about the enforcement of the city’s existing policy has been mixed so far. The discussion on stepped-up enforcement at the cemetery came after the city received complaints, according to Marshall.

The topic of cemetery code enforcement was brought up during the Aug. 15 Grantsville City Council meeting. At the meeting, Marshall described some of the decorations on gravesites as artistic and said people had done “amazing things,” but city employees struggled with mowing and watering grass due to some of the displays and decorations.

During the meeting, Marshall and city councilmembers Neil Critchlow and Krista Sparks admitted there were shepherd’s hooks and other code violations on the burial lots of family members, which would need to be removed with the stepped-up enforcement.

While Critchlow defended some of the decorations, like shepherd’s hooks, which are less troublesome to mowing, Sparks expressed concern about the state of the cemetery during the Aug. 15 meeting.

“It’s an eyesore to me,” Sparks said. “I think the cemetery is an eyesore, with all these extras and all these lights … And I know people have their own way of paying respects, but we’ve got to have standards.”

At the same meeting, City Councilman Tom Tripp sided with the need to remove the decorations that violate city code.

“As painful as it is, I’d like to see things get cleaned up a bit,” Tripp said. “I see all these flowers here and they were certainly put there with care. But when you stack them out on the lawn and around the headstone, it’s now costing the city money to deal with that.”

When someone applies for a burial plot at the Grantsville City Cemetery, the application form includes language that requires they agree to comply with the rules and regulations of the city, according to Marshall. The city’s code related to cemeteries is available online at grantsvilleut.gov or at Grantsville City Hall.