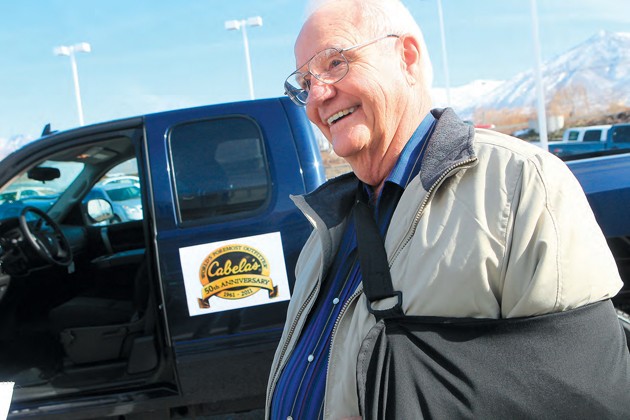 Don Nielson was just about to take his wife to breakfast on his birthday last month when he got an unusual phone call.

During the course of 2011, entries were collected and 50 pickups, as well as various quantities of other prizes, were given away. Nielson said he did not know what the contest was, let alone that he had entered it, but with each swipe of his Cabela’s credit card his name had been entered into the drawing. Nielson’s name was drawn on Dec. 28 in the ninth of 10 drawings.

He said it took a few days, several phone calls and a bit of research for convince him his win was legitimate.

The truck had to be delivered to a Chevrolet dealer, and the company initially wanted to send it to a dealership on the Wasatch Front, he said, but he wanted it delivered to Quality Chevrolet in Tooele instead.

Nielson is not a stranger to pickup trucks. Nine months ago, he bought a Dodge Ram 2500 pickup from Quality, which he said has been very useful. Still, though the seven-year-old Dodge has been nice, it will be sold to pay for the taxes and fees associated with the new Chevrolet, he said.

Before the Dodge goes, though, Nielson will take off the bed’s shell and running board for use on the Chevrolet. Because the new truck is fairly high off the ground, the running board will make it much easier for Nielson and his wife, Norma, to get in and out.

Norma Nielson said trying to figure out whether the prize was legitimate or not was a nightmare, but the windfall is exciting now that they know it is real.

With the truck on the lot and ready to drive away, all that was left for Nielson to do was pay for license and registration.

“Notice which card I’m using,” he said, handing over his Cabela’s card to pay for the licensing fees. “Isn’t this a great birthday present?”