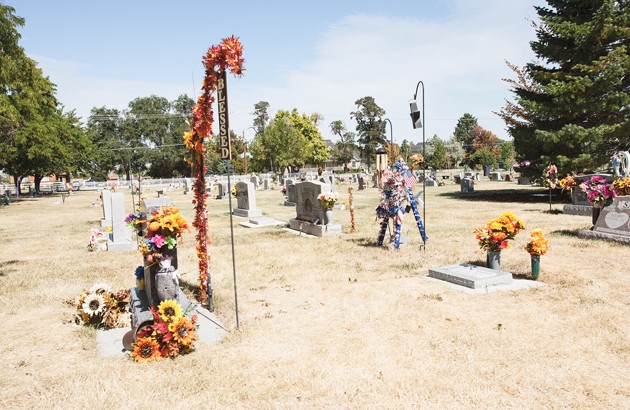 Grantsville leaders may reconsider a proposed cemetery code after listening to citizens’ concerns at a city council meeting.

The Grantsville City Council heard a citizens’ plea Wednesday night for the city to back down on enforcing an existing code that prohibits or limits graveside decorations at the city cemetery.

And it appears the city council may take another look at the code because of citizens’ concerns and the city not fully enforcing the code for years, some council members said.

During Wednesday night’s public comment period, Grantsville resident Necole Anderson gave an emotional appeal to the city council to reconsider requiring all graveside decorations that are in violation of cemetery code to be removed by Nov. 1.

That date was published in Mayor Brent Marshall’s recent newsletter, which was distributed in residents’ city utility bill. It said items left after Nov. 1 would be removed by cemetery personnel.

“As long as I have lived in Grantsville …  none of these ordinances have ever been fully enforced. My question is: why now?” Anderson said. “… Ever since my little girl passed 3 and a half years ago, I have always had her whole entire grave area decorated for holidays, her birthday — and nothing has ever been said.”

Anderson said she understands the difficulties cemetery personnel have maintaining the cemetery, but she feels adorning her daughter’s grave is something she needs to do.

“I know it can be difficult for maintenance, but I’m asking if this can be looked at at least one more time,” Anderson said.

She also noted that some families who have tall, metal markers at the cemetery don’t have the means to pay for a funeral and a gravestone. The families “do what they can” to show who is buried there.

Anderson submitted a package of photos of her daughter’s grave and a citizen petition to council for the cemetery code to be reconsidered. Anderson said her husband and father are also buried in the Grantsville City Cemetery.

Also during the public comment period, Grantsville resident Kevin Hall, who has a daughter in the cemetery, urged the council to consider all aspects of the cemetery issue and not eliminate all decorations not attached to a headstone.

“I ask that we just not take a broad stroke and wipe everything out,” he said.

Grantsville resident Ann Strickland, who said she has a son buried in the cemetery, asked the council if some kind of compromise could be reached instead of everything being removed.

“I feel we should be able to have something there,” she said. “We have some shepherd hooks there. I understand they get in the way, but we go down and cut the grass around those things. At least compromise. That will make everyone feel better but not just have everything out.”

Among the decorations prohibited by city code are glass or other breakable containers, any objects not kept on the headstone, or any objects that has “become faded, worn, weathered, or otherwise unsightly.”

The code also makes it unlawful to plant shrubs, trees, flowers or other plants; it is similarly unlawful to place decorative stones, place monuments or markers, or any permanent structures upon any cemetery lot without approval from the city.

Wires, sticks, pegs, pinwheels and iron rods are also prohibited in the cemetery.

There are exceptions to the city’s cemetery policy on decorations, but they are limited to the week following the burial on a lot and for Memorial Day weekend.

Councilwoman Krista Sparks said that she has family members in the cemetery and urged everyone to go back and read the city’s code regarding decorations. She noted the current code does allow for decorations during certain times, and some items can stay in the headstone strip.

“So it’s not saying ‘nothing ever,’” she said. “… I would go back and read the ordinance and see what is actually allowed because I think a lot of the talk around town is nothing can be there.”

Sparks also said the code may need to be updated and it is the city’s “bad” for not enforcing it.

Four additional citizens commented on the Nov. 1 deadline, with one telling the council it had made a mistake not enforcing the cemetery code.

Councilwoman Jewel Allen, who was serving as mayor pro tem for the meeting due to Mayor Brent Marshall’s scheduled absence, thanked the citizen speakers for their comments and said the council would look at the issue.

During councilmember reports at the end of the meeting, the council indicated they were willing to review the current cemetery code and make possible changes. One stated change was to make sure the code is enforced.

There was no time table offered as to when the council would review the code, or if the Nov. 1 deadline would be deferred until that review occurs.