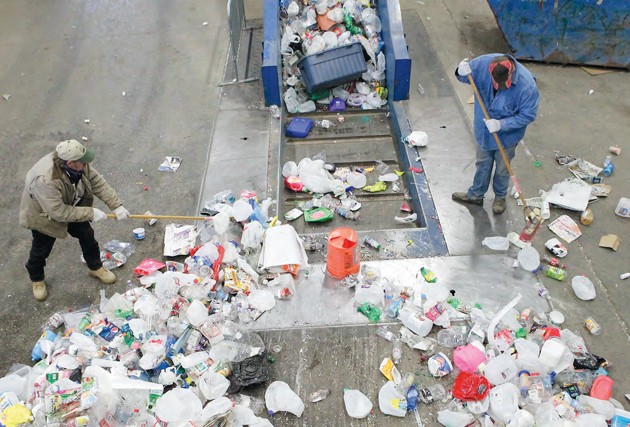 Donald Anderton and Alan Anderton work on bailing plastic at the Tooele County Landfill Dec. 4, 2012. New recycling cans will cost Grantsville residents $5.50 per month if they choose to participate in the program.

The Grantsville City Council voted Wednesday to approve a contract with Ace Disposal, a Springville-based company, to haul away disposed recyclables in blue recycling cans. The cans will cost residents $5.50 per month.

Mayor Brent Marshall said the effort behind curbside recycling in Grantsville is to reduce trash and dumping fees. Residents who currently have two garbage cans may be able to cut it to one if they separate recyclables and toss them into the blue can.

Dumping fees are currently about $42 per ton. According to Ace Disposal’s bid, the city would be paid $7 for every ton of recyclables collected by Ace.

However, the approved contract comes with a catch — the program will not be implemented unless enough residents participate.

Marshall said the recycling program would, like curbside recycling in Stansbury Park, be an opt-out service; residents will have to specify to the city if they don’t want to be included. The cost to residents per month is dependent upon participation — the $5.50 per month cost is based on 25 to 50 percent of residents participating, with costs likely decreasing if participation is above 50 percent. The cost of a regular garbage can is currently $7 per month.

Information on how to opt out will be forthcoming in the mayor’s monthly letter to residents. An opt out form will also be sent to residents.

Marshall said the city is looking at opening the opt-out period from March 1 to March 31.

Residents who do not reply by March 31 will be counted in the program. Marshall said if more than 75 percent of residents opt out, leaving the participation rate under 25 percent, the city won’t launch the program. If participation is high enough, it will be started in July or August.

The council mulled a curbside recycling program for several months before sending out a request for proposals in December. Marshall said the city has been holding out for a proposal that would mutually benefit both parties the most, especially with consideration to the specifics of Grantsville’s streets and residential density.

“We’ve been working on this for over a year and it’s taken us a long time to where we felt comfortable with the contract,” he said.