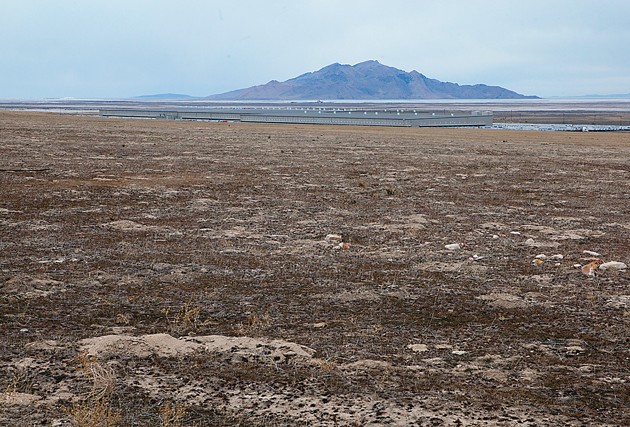 The Grantsville City Council’s approval of an amended ordinance now prohibits large prisons from locating within city limits, like the above site near the Walmart Distribution Center. The site is under consideration by the state’s Prison Relocation Commission.

The Grantsville City Council has enacted a contingency plan to try to keep the Utah State Prison out of the city’s borders.

Wednesday night’s unanimous council vote approved an ordinance to amend the city’s land use management and development code to add prisons and other correctional institutions to use tables in chapters 14, 15 and 16.

The amendments essentially zone out the state prison by putting distinct limitations on the size and location of the facility. The ordinance only allows a prison with up to 249 beds in manufacturing zones with a conditional use permit approved by the city.

The proposed Utah State Prison is expected to house 4,000 inmates, the same number held in the current Draper facility.

No prison, jails or other correctional facilities will be permitted in any areas in Grantsville City zoned for agricultural, residential or commercial purposes.

The 11-page ordinance cites studies on rural communities in New York, Texas and California to argue that Grantsville is not capable of sustaining a facility as large as the Utah State Prison.

“We’ve done this partially because we don’t feel that we have the infrastructure to be able to provide those services that are required or needed for those types of facilities,” Mayor Brent Marshall said.

Water, road and sewer infrastructure were listed as reasons in the ordinance as to why the city could not sustain the state prison. A facility the size of the state prison could use up to 700-acre feet of water per day, which could limit future growth and development in Grantsville, the ordinance said.

Marshall admits the zoning amendment is just one tool Grantsville is using to keep the prison out of the city. It is possible there could be legal challenges to the amendment by the owner of the parcel, Darrell Nielsen, or the state, the mayor said.

“I believe that there could be some challenges, but I believe we have the right to decide what we want in our community,” Marshall said.

Councilman Scott Stice said the state should remove the proposed Grantsville location, on a 4,200-acre parcel in an industrial park surrounding the Walmart Distribution Center. The state Prison Relocation Commission added the parcel to a short list of five possible sites on Feb. 27.

“If the relocation committee did what they say they’re doing, which is evaluating sites, then our sites would then obviously drop off,” Stice said. “That doesn’t seem to be what they’re trying to do. We have to do whatever we can to keep it out.”

In addition to creating a potential legal barrier to the prison locating in Grantsville, the ordinance reinforces the city’s stance against a proposed location in the county.

“I personally feel that Tooele County has been ostracized by the state of Utah with the PRADA committee and the PRC committee,” Marshall said. “We have the most sites on the list … yet we’ve never been allowed to have a representative on that committee.”

The city of Draper and Utah and Salt Lake counties all have representation on both committees.

Marshall said he met with Darrell Nielsen, who owns the property in Grantsville under consideration for the prison. Nielsen has signed a letter of intent to sell his property to the state, Marshall said.

“Our ordinance tonight eliminates his property, by zone, of that potential prison site,” the mayor said.

Marshall said he has been in contact over the phone with Nielsen, who lives in Bountiful, about removing his property from consideration.

Councilman Neil Critchlow said constituents have reached out to express their concerns and the city remains resolutely against relocating the state prison to Grantsville.

“I had two phone calls last night from concerned citizens that they really didn’t want the prison here,” Critchlow said. “I assured them no one on the council, the mayor, the city, want this prison.”