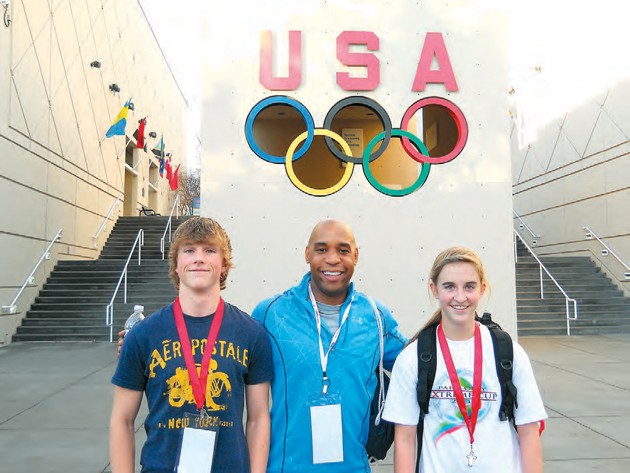 (l to r) Dallon Didericksen, coach Will Pace and Michaela Didericksen pose for a photo at the Olympic Traning Center in Colorado Springs, Colo. Dallon finished fourth in his division at the 2012 Junior Open Taekwondo Team Trials and Michaela finished third in her division. photo courtesy of Gail Didericksen

The Grantsville brother and sister tandem of Dallon and Michaela Didericksen excelled at the 2012 Junior Open Taekwondo Team Trials on Jan. 14-15 at the Olympic Training Center in Colorado Springs, Colo. Dallon placed fourth in his division and Michaela place third in her division.

Dallon was the first to compete on Jan. 14 and really set the bar high in his first shot at making the Junior National Team. He fought smart and effective and defeated his first competitor with ease. Dallon’s next two matches were hard fought but he eventually gave way in the semifinals to a competitor who eventually made the national team. Dallon was one fight away from representing the USA in Egypt in April 2012. Dallon will now have the chance to fight in the senior division with an opportunity to make the senior national team at the U.S. Open on Feb. 21 in Las Vegas.

Michaela competed the next day and scored a bye in her first match and had to fight the winner of two very tough opponents. The first match that Michaela had was a reminder to everyone just how dominant she is. Michaela controlled this fight the entire match and got her first win. Her next fight was against a reigning national team member. Michaela sustained an injury in the second round. This was the turning point of the match. Her competitor was able to score two head kicks and put a win out of reach. Michaela then fought her way back from the losers bracket defeating an experienced fighter from Illinois. This put her into the semifinal round against a tough competitor from Colorado. In this very exciting match, Michaela fought back from a six-point deficit and almost overtook her competitor, but ended up losing by one point in the last seconds. Michaela also missed making the national team by one fight. At only 13 years old the future looks good for Michaela. Most of the competitors at the trials were 16 and 17 years old.

Dallon and Michaela have both been training in the sport of Taekwondo for a combined 16 years, and have both achieved the rank of Black Belt. They have medaled in many international and national tournaments. They have been very dedicated to this sport and have sacrificed time, money, and their parent’s patience at times. Dallon and Michaela do not train around the corner. For the last seven years, their parents and uncle have driven them into Salt Lake City to train under Master Will Pace at Pace Academy Taekwondo.