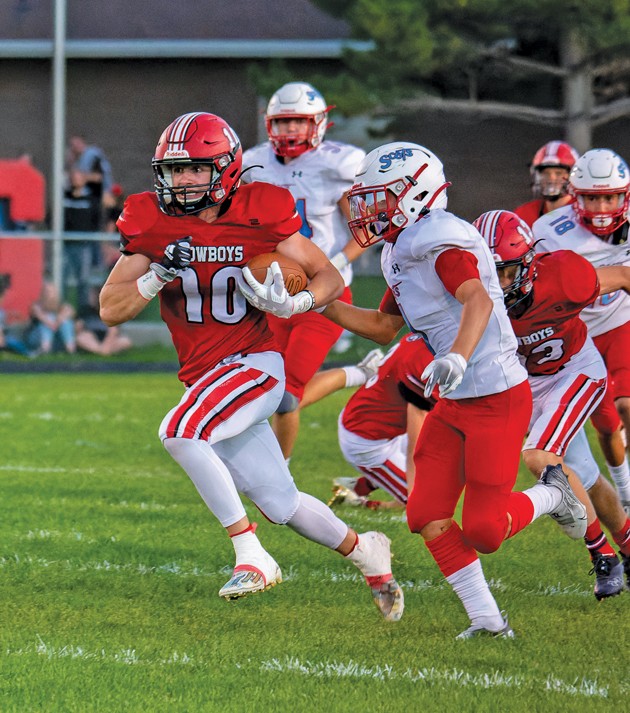 Cage Johnson (10) runs with the ball after recovering a fumble against Ben Lomond.

September 21, 2021
Grantsville runs over Scots for first 3A North victory

Grantsville relied on a strong rushing attack to win its first 3A North game and fourth-straight game of the season Friday night with a 41-7 victory over Ben Lomond (1-5) in Grantsville. The Cowboys’ record improved to 4-2 overall.

Seven players carried the ball and ran for 227 yards on 23 rushing plays to wallop the Scots. Grantsville led 41-0 midway through the third quarter, with Ben Lomond scoring a TD on a pass in the fourth quarter.

“We were having success running the ball. We always want to be a run-first team,” said Grantsville coach Kody Byrd.

“It’s going to be a fun four weeks. We know there are some big tests ahead, a region title is one of our goals” the coach said.

“We still need to take it one week at a time, stay hungry and stay humble with respect for other teams and the players we go up against each week,” Byrd said.

Grantsville completed only two passes against Ben Lomond — both went for touchdowns.

Cage Johnson scored the first of the Cowboys’ six TDs on a 33-yard run and that was followed by a 45-yard pass from Caleb Sullivan to Grant Rounds to make it 13-0 after the first quarter.

Sullivan scored on a 23-yard keeper midway through the second quarter and then fired an 18-yard TD pass to Blake Thomas at the end of the first half and Grantsville led 27-0 at intermission.

On defense, Mouritsen recorded five tackles with three of them for loss and one sack. Ikakoula Toutai had four tackles and two for loss. Johnson had three tackles.

Joey Scorsone recorded two pancake blocks on offense and a sack on defense. Hunter Bell recovered a fumble and also intercepted a pass.