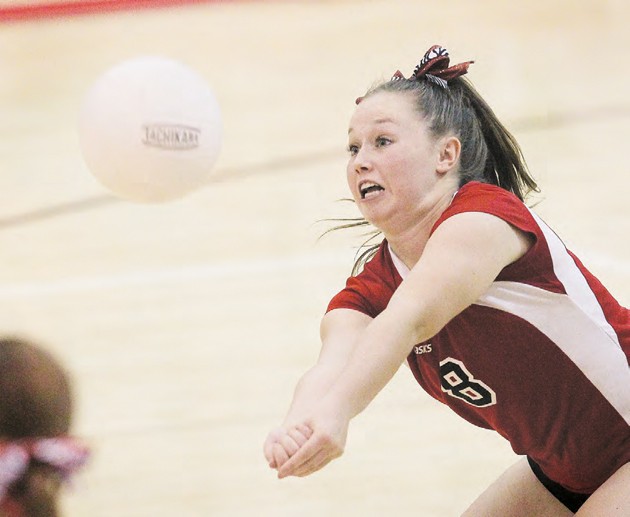 The Grantsville volleyball team inched closer to a trip to the state tournament Tuesday night with a come-from-behind victory over rival Tooele in five sets on its home court.

“In the third set our players took control,” said Grantsville coach Stefanie Orgill. “I told them ‘you know what to do,  you know what it takes’ and they responded. I talked to the captains and let them do the talking during a timeout. That’s the first time I’ve taken that approach —  maybe I learned something myself.”

Senior captains Whitney Turner and Anna Christensen turned into top motivators and coaches as the Cowboys jumped out quickly in the third set after having just squandered five set-points in the second set and losing 25-27.

The Cowboys rocketed out to a 12-3 advantage in the third set behind the superb play of the captains. Turner supplied some early kills in the third set, and Christensen pounded three consecutive ace serves followed by a pair of kills herself.

A talented, but young, Tooele squad still battled back in the third, and when libero Madison Gibson ripped a back-row kill the Buffaloes had sliced Grantsville’s lead to 15-13. The set was close from then on, and the Buffaloes eventually tied it at 22-22 and were only three points away from winning their fifth Region 11 match in three straight sets over the Cowboys.

Grantsville won the next two points to go up 24-22 and then Tooele’s Kassidie Russell assisted Shaundra Olsen with a perfect set for a kill to make it 24-23 Grantsville. The Buffaloes tied it at 24-24 then Grantsville’s Amy Matthews knocked a deep shot for a winner to give the Cowboys a 25-24 lead. The final point of the third set seemed to go on forever as both teams battled hard, but finally a miss-hit by the Buffaloes sailed into the net and Grantsville had prevailed 26-24.

“We played with a lot of high energy starting in the third set and maintained it the rest of the match,” Orgill said.

Grantsville had Tooele’s number after the third-set win and with the fourth set tied at 6-6 won six straight points to gain a 12-6 advantage. The Cowboys were in control the rest of the fourth game and ended up winning 25-15.

Grantsville jumped out to a 6-2 advantage in do-or-die game five when Turner scored an aced with a hard jump-serve. Tooele came back to slice the lead to 9-7 with a block and dump from Brin Stewart to force a timeout by the Cowboys.

Grantsville then proceeded to score five straight points behind the serving of Jessy Davis and eventually won the fifth set 15-9 to secure the victory.

Christensen ended up with 15 kills, five aces and four blocks while Turner blasted 17 kills and five blocks. Sidney Conrad ended up with 33 assists.

Tooele jumped on Grantsville to start the match and led 8-2 in the first set after Russell provided Taylor Thomas with a solid set for a kill. Grantsville battled back and eventually tied the set at 21-21. Olsen hit a winner, Russell a dump shot and then a deep-shot winner to give the Buffaloes the first set 25-23.

The teams played a tight second set and midway through Grantsville led 14-10 after a cross-court kill by sophomore Mandy Wilson. Grantsville led 17-11 when Tooele made a run to eventually slice it to 19-17. Grantsville regrouped and appeared prime to tie the match at 1-1 with a 24-18 advantage, but Tooele dug deep and came back to win the second set behind great play from Thomas, Katie Jensen, Russell, Olsen and Stewart.

It was a pivotal victory for the Cowboys who are now tied with Ben Lomond for the fourth and final state playoff spot. The Cowboys and Scots are tied with 3-5 records and go at it tonight in Grantsville at 6 p.m. The Buffaloes are in third place with a 4-4 record after consecutive five-set heartbreakers to rivals Stansbury and Grantsville. The Buffaloes play at Ogden tonight and host Morgan on Tuesday. Stansbury is in second place with a 7-2 record after being swept by Morgan (9-0) in Morgan Tuesday night 25-14, 25-11, 25-11. The Stallions host Ogden on Tuesday and then Grantsville on Thursday, Oct. 11.