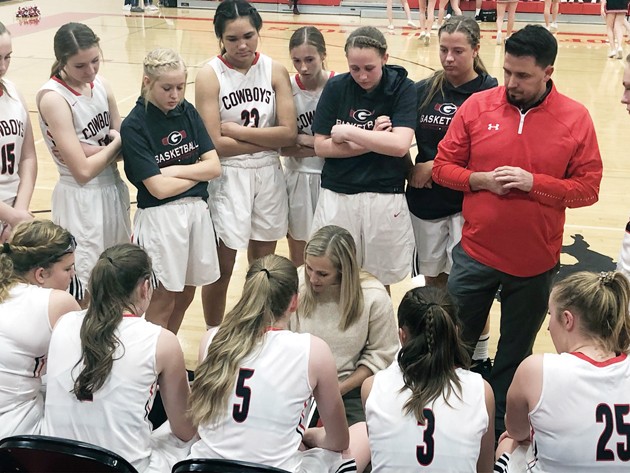 Grantsville girls basketball coach Megan Vera talks to her team during a timeout in the first half of Thursday’s season-opening game against Delta at Grantsville High School. The Cowboys won the game 37-29.

The Grantsville girls basketball team is going with a youth movement this season, with eight underclassmen — including four freshmen — on the roster for Thursday’s game.

While the young Cowboys showed flashes of what they can become in Thursday’s season-opening 37-29 win over Delta at Grantsville High School, there were also moments when their inexperience showed. But that’s what the preseason is all about, and the win left Cowboys coach Megan Vera hoping her team got some of the bugs worked out.

“I don’t even think it was nerves,” Vera said. “I think it was a little bit of lack of experience and not a lot of time playing together yet, so we’ve got to get in a rhythm together.”

Grantsville’s freshmen — McKenzie Allen, Ellie Thomas, Emily Ware and Maile Bartley — knew they were going to get playing time in Thursday’s game, particularly with senior Laura Sandberg missing the game with an injury, but they might not have expected to get thrown into the fire quite so quickly. Junior forward Maison White picked up her second foul of the game less than six minutes in, and senior guard Ashlee Edwards went to the bench with two fouls 21 seconds into the second quarter. That meant Grantsville (1-0) was without two of its most experienced players for a large chunk of the first half, and it was up to the youngsters to not only survive against the Rabbits (0-1), but thrive.

“We knew we were going to be playing with some lineups, and we really didn’t know what to expect,” Vera said. “It was great experience for them, for sure. We’ll end up relying on them. We’re going to need them down the line. It wasn’t chance that they were in the game — we knew that they would get minutes — but we did have to rely on them a little more than we anticipated.”

Both teams had to endure slow starts. Delta went more than 11 minutes before it got its first field goal, and turned the ball over 10 times in the opening quarter. Grantsville didn’t score until 2:02 into the game on a jumper by Hillary Cloward, and didn’t crack double-digits until more than halfway into the second quarter.

The Cowboys led just 6-3 after the first quarter, but their freshmen provided a spark. With 2:17 left in the first quarter, Allen stole the ball and went coast-to-coast for a layup, showing off the speed that made her such a scoring threat during soccer season. Thomas scored the first points of her varsity career to put Grantsville up 8-3 early in the second quarter, and after Delta forged a 10-10 tie late in the first half, Ware’s first varsity points put the Cowboys ahead to stay.

In fact, Ware’s basket sparked an 13-6 run that stretched well into the third quarter and put Grantsville ahead 23-16. Edwards hit a 3-pointer and added a pair of free throws during the Cowboys’ surge, while Thomas hit a pair of free throws and Bartley scored her first points for the varsity squad. Delta’s Jadee Dutson hit a 3-pointer at the buzzer to pull the Rabbits back within four points entering the final quarter.

Unfortunately for the Rabbits, the Cowboys had another run left in them — this one an 11-2 spurt that put them up by 13 points with 2:41 left in the game. Edwards hit another 3-pointer, while White scored seven points in the final period to help Grantsville pull away. Bartley and Allen also came up with big baskets.

“I think as the season goes on, we’ll continue to see more and more from them,” Vera said of the freshman quartet. “Right now, it’s about figuring out how to be more disciplined on the court. That’s what we were really lacking (Thursday). I felt like our offense started to flow toward the end, and hopefully that can carry on.”

Dutson and Jordyn Nielson each scored 10 points for the Cowboys.

Grantsville faced Carbon, which figures to be one of the top teams in Class 3A this season, in a non-region game Tuesday night in Grantsville. The Cowboys’ preseason schedule is particularly challenging, with upcoming games against Class 4A foes Stansbury, Tooele, Mountain Crest, Canyon View and Hurricane, along with Class 5A Mountain Ridge and Orem.