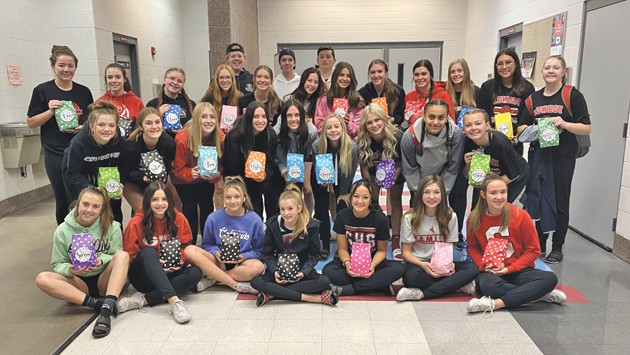 Grantsville volleyball players pose for a photo prior to a trip to Richfield for a state playoff match.

October 26, 2021
Grantsville volleyball wraps up season with loss to Richfield

The 2021 Grantsville Volleyball team, led by two seniors, Danya Craner and Kylee Broadhead, completed their season on Saturday with a 1-3 loss to Richfield High School in Richfield in the first round of the playoffs.  The lower-ranked Cowboys came out strong and took the first set from the Wildcats, 27-25, despite the ‘Cats home court advantage. Unfortunately, Grantsville wasn’t able to maintain its momentum and faltered in the next three games (18-25, 13-25, 15-25) to end their season earlier than they would have liked.

Coach Kelbey Fisher commented, “While the match started fantastic yesterday by winning the first set and keeping a tight second set, we unfortunately came up short after not being able to finish and close out plays against a tough and scrappy Richfield team. The girls played their hearts out. I am proud of the fight and energy they brought.”

The Richfield announcers on the live broadcast  also praised the fight Grantsville showed and commented on the improvement the team had made since the Cowboys faced Richfield earlier in the season, hinting that the Wildcats may have initially looked past Grantsville.

“I knew we were going to be overlooked, “ Coach Fisher explained. “We did not show our best at the Sevier Valley tournament when we played Richfield the first time. The girls worked really hard after that tournament and showed true fight.”

The Cowboys opened with strong hitting and serving while the Wildcats struggled to serve the ball consistently in the first set.  It was a close game throughout, and both teams battled until the end with Broadhead serving an ace to go up 26-25, and then Brylee Castagno finished off the match with a kill.

The second set was within two-three points for most of the game, but Grantsville trailed from the beginning. Richfield made adjustments during the first and second sets and came out serving and swinging on the outside and out of the middle with very tall hitters.  Libero Avery Allred made some fantastic saves along Broadhead who had an unreal one-handed rescue to keep the Cowboys close. In the end Richfield’s big outside hitter and middles proved too much as GHS lost the second set, 18-25.

Set three opened with a seven-serve run by the Wildcats’ Grant. Down 0-7, the Cowboys continued to fight and chase down balls, but the closest they came in catching Richfield was at 13-16 following two aces by Allred. Richfield reclaimed the ball on a kill, and Grant proceeded to serve out the match with the ‘Cats big outside hitter and middles getting several kills to win 13-25.

In the final set, Richfield maintained their momentum and rode their strong hitting and serving to a 15-25 victory that ended the Cowboys season.

Although Fisher and his team exited the tournament earlier than desired, he was proud of the growth his team has shown and looks forward to the future with his young team that gained so much experience this year.  “Despite the many injuries and challenges we faced this season,” he explained, “the team showed tremendous growth and came closer together as a volleyball family.”

Fisher acknowledged the leadership role his two seniors filled. “Our two seniors were tremendous examples at accepting roles.  They chose the theme “team first” back in February and helped display that focus every week.”

He concluded: “We had many great moments and fun times this season, from team activities to bus rides to incredible volleyball plays from all players!”

As the 2021 season ends, Coach Fisher is already looking to the future and noted. “Off season is so valuable for growth, and if we have players committed to working hard, then the future is going to be very bright for Grantsville volleyball!”