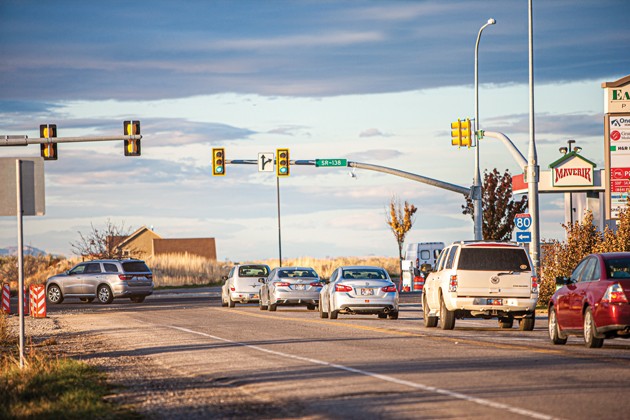 The intersection of Utah State Route 122 and 138 in Grantsville. Traffic along this corridor is a concern of city officials and zoning the district as high-density housing may further aggravate road congestion.

October 22, 2019
Grantsville voters will also decide on fate of Prop #8

Voters in Grantsville on Election Day will make known their stance on referendum petition question Proposition #8, which asks if Grantsville City Ordinance 2017-07 should be repealed or not.

As presented to voters on the Grantsville City website, the City Council passed Ordinance 2017-07, which amends the city’s official zoning map at 300 S. State Route 112. It rezones 5.05 acres of land from a commercial shopping zone to an RM-15 zone — multiple-unit residential with up to 15 housing units per acre.

The CS zone permits shopping center development at a community level scale. The RM-15 permits medium or high density residential units with the opportunity for varied housing styles and character. No other property is affected by Ordinance 2017- 07.

Voting in favor of Proposition #8 effectively repeals Ordinance 2017-07 and returns the area to a commercial district zone. A vote against the proposition is a vote in favor of keeping the multi-family residential designation.

During a question and answer forum at the Grantsville Public Library on Wednesday night (see related front-age story), four candidates vying for three seats on the Grantsville City Council shared their platforms and were asked how they would vote on the proposition and why.

Candidate Jeff Hutchins said that he did support the proposition, citing probable traffic congestion at the intersection of SR-138 — Grantsville’s Main Street — and SR-112 as his main concern. But he was not opposed to housing growth in the city and suggested building the apartments elsewhere.

“I think there’s a better place for apartments like that,” he said.

“I’m not opposed to multi-level three-story apartments,” Hutchins said. “We’ve got to have some multi-family housing and there needs to be an area where that works. I’m just not convinced that 5 acres on SR-112 is the spot. With that being said, we need to continue to look because I don’t want to discourage multi-family housing to be developed here. We’ve got to have a spot for that, but for me that’s not the spot.”

Candidate Darrin Rowberry said that the property is not well-suited for multi-family housing mostly because of traffic.

“That property would probably be better suited for business,” Rowberry said. “I think leaving it as CS designation is probably the best thing to do just because of its location.”

Incumbent Jewel Allen said she had a chance to vote on the referendum twice during her tenure as a City Councilmember, stating that she voted against designating the area as high density housing both times.

“I was concerned with traffic along that corridor,” she said. “I was also concerned with having to give up commercial in that spot. In relation to Proposition #8, which brings to citizens the decision that was passed that I voted against, I would vote [to repeal it] because I feel that based on having studied it and based on the votes that I made, there are better places for high-density, if at all, in Grantsville.“

Candidate Derek Dalton was the last to share his position on the proposition.

“I’m still on the fence about this proposition, and I’m doing my homework,” he said. “Do we need apartment complexes? I believe we do, but is this the best place for it? It worries me because of [SR-112]… either way, that area is just bad for an RM-15 zone.”

A Facebook live video of the Q&A session can be viewed at the Election Central – Tooele County Facebook page.