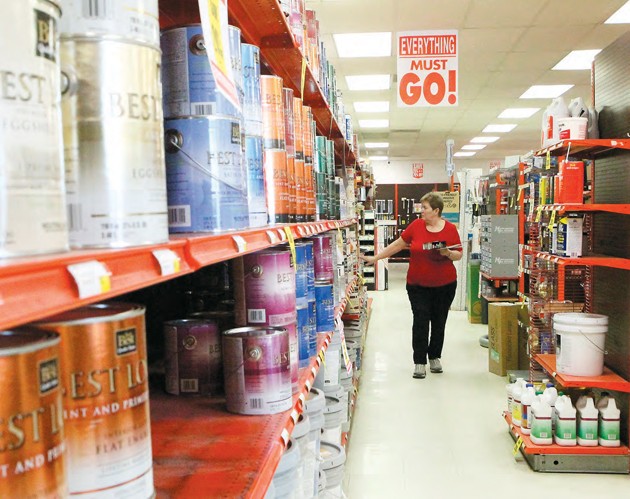 Julie Skeem walks through Hometown Hardware Thursday afternoon in Grantsville. The hardware store has been in Grantsville since the 1940s, but it will close after all merchandise and fixtures are sold.

The power tools are all gone. Grantsville will soon be without Hometown Hardware.

“The men gathered over them and fought for them the first day of the sale,” said Sherri Johnson, who has owned the store for 13 years.

Everything is discounted, up to 75 percent off: paint, plumbing and electrical supplies, hand tools, hardware, Christmas tree stands, cleaning supplies and more.

When everything is sold, including the store’s fixtures, Hometown Hardware will close — but the doors won’t be locked for long. A new daycare center will open soon in its place, according to the store’s owners. “Closing the store brings mixed feelings,” said Johnson. “I’m tired of running a hardware store and I got an offer on the building that I could not turn down.”

Christopher and Jennifer Fawson bought the building to house an expansion of their business, Kidsville, a licensed daycare and pre-school. The Fawson’s currently operate Kidsville out of their home in Grantsville.

“We were doing a good business,” said Kelly Clark, who partnered with Johnson in the hardware store business nine years ago. “The big box hardware stores had an impact, but we were still doing pretty good.”

Hometown Hardware sold hardware and lumber to retail and commercial customers. The store was also an Intermountain Farmer’s Association dealer and carried agriculture supplies, farm supplies, and bulk feed. “Our store has about 10,000- square-feet,” said Johnson. “There is still a demand in Grantsville for a local hardware store. Somebody could come along and open a smaller store, around four to six thousand square feet, and do very well.”

The store has eight part-time and two full-time employees that are looking for new jobs, said Johnson.

“We will give them good letters of recommendation and do what ever we can to support them,” she said. “Our employees and customers have all been very good and loyal over the years.”

Grantsville has a long history of local hardware stores dating back to the 1940s. That’s when Grantsville pioneer Hilda Erickson opened a general merchandise store on Grantsville’s Main Street.

The Geldmachers, Williams, and Butlers are also among Grantsville families that have sold lumber, hardware and coal.

“I don’t like it,” said Reed Skeem, referring to the closing of Hometown Hardware. Skeem has lived and shopped locally in Grantsville for 48 years. “The hardware store is an important part of our community. Where am I going to find the stuff I need to fix things now?”