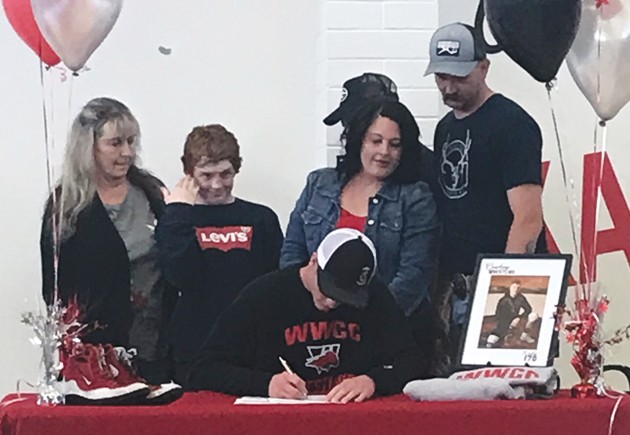 May 23, 2019
Grantsville’s Johnson signs NLI to wrestle at Western Wyoming

Koby Johnson’s list of accomplishments as a member of the Grantsville wrestling program is impressive to say the least.

He’s a four-time team MVP — the only Grantsville wrestler ever to do so. For three years, he was a team captain. As a senior, he was a Class 3A state runner-up and an Academic All-State selection.

On Monday, he added another feat — college signee. Johnson will spend the next two years in Rock Springs, Wyo., competing for the wrestling team at Western Wyoming Community College.

“When I visited up there, they had a really nice campus and the wrestling team is actually really good,” said Johnson, who hopes to study engineering with his sights set on a career in architecture. “That’s kind of what pushed me to choose them. Their wrestling team is very dedicated, and they all have the same goal of being at the top.”

Collegiate wrestling opportunities are few and far between, as many schools have eliminated their wrestling programs in recent years. That makes Johnson’s accomplishment even more impressive, Grantsville coach Clarence Evans said.

“It takes an awful lot of dedication and commitment,” Evans said. “The talent pool is really concentrated, so it’s really tough regardless of what level you go to. Hopefully, the kids will follow in his footsteps and try to step up to the next level. It’s awesome to have a kid reach it.”

Johnson has fully dedicated himself to his sport, spending months competing during the offseason in addition to the time he spent in four years competing for Grantsville High. He has learned a lot from coaches like Evans and Stansbury coach Tyson Linnell, who coaches him during the offseason, as well as former Stansbury wrestler Anthony Herrera, a 2018 Utah state champion who will be a teammate at Western Wyoming.

“I think it helps a lot,” Johnson said. “It shows how dedicated you are, and that’s what the coaches are looking for. If you wrestle all year, it shows them that you’re dedicated and you want to wrestle. Anthony Herrera is always helping me during the spring and the summer, so it’s nice to be able to have a kid who’s been wrestling in college to come down and help me.”

Evans said Johnson’s departure will leave a major hole in the Grantsville program, but the example he set over the past four years has set a standard for the Cowboys’ underclassmen.

“He’s an outstanding example,” Evans said. “All the kids always looked up to him. He was always willing to help them and show them little things that worked for him, or maybe, ‘hey, try this and see if it will work for you’ — that kind of thing. He was almost like having another coach in the room. He was great. He would come and help with the little league as well.

“He leads by example and shows them what it’s going to take or what it has taken to step it up each year. I would say that his hard work is his lasting legacy.”

Johnson thanked his parents, brother, and friends for their support, as well as Evans and the Grantsville coaching staff and Linnell for helping him get to the next level.