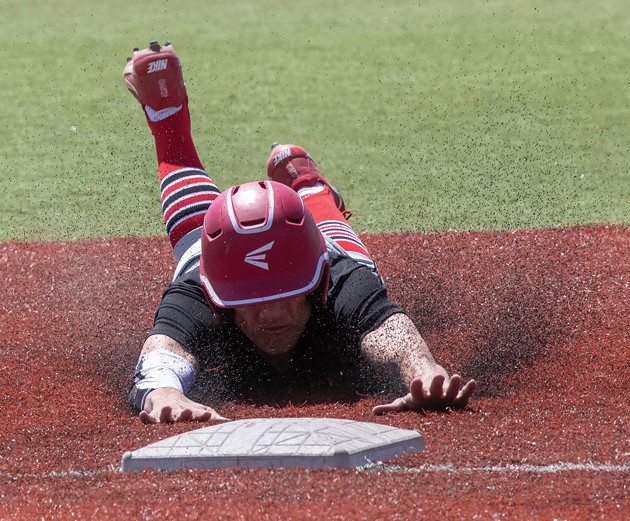 May 14, 2019
Grantsville’s title defense ends with loss to Bulldogs

Every baseball team at every level has its peaks and valleys; its hot streaks and its slumps throughout the course of a season.

Unfortunately for the Grantsville baseball team, its slump hit at just the wrong time — late in the season — and it ultimately brought the Cowboys’ season and their defense of the Class 3A state championship to a close on Thursday afternoon at Cate Field in West Jordan. Grantsville’s 6-3 loss to Region 13 rival Judge Memorial in the state tournament’s one-loss bracket eliminated the Cowboys from the postseason, as they struggled to get much going offensively.

“For some reason, we just didn’t play well the last couple weeks,” Grantsville coach Aaron Perkins said. “At the end of the day, I’m really proud of our team. We never quit, we kept working hard in practice, and we’ll be back. We’ll be better from this. This game has so much failure, and sometimes you’re just on the wrong end of it.”

The Cowboys (18-9) found themselves in a 3-0 hole entering the bottom of the fourth inning after the Bulldogs (14-13) got a little offense going against Grantsville starter Parker Thomas. A one-out walk by Judge’s Pete Callahan in the third inning, followed by a sacrifice bunt by Michael Paul, set up the Bulldogs’ first run when Henry Frech’s drive to right field eluded Grantsville’s Zach Capell. Capell recovered in time to throw out Frech at second base, but not before Callahan scored.

In the fourth inning, Alex Carrillo led off with a single and later scored on Isiah Moore’s ground-rule double to left-center. Moore came around to score on a wild pitch and a passed ball.

Grantsville cut the lead to 3-1 in the bottom of the fourth, as Austin Wilcox doubled down the left-field line, stole third and scored on a sacrifice fly to left by Ethan Merrill. Judge made it 4-1 on a two-out walk by Frech that led to an RBI single by Carrillo in the top of the fifth, but the Cowboys answered with two runs to make it 4-3 after five.

Parker Thomas reached base when strike three got past Bulldogs catcher Alex Zang, and after a base hit by Isaac Riding, courtesy runner Blake Thomas scored on an RBI single by Jackson Sandberg. Riding scored on a sac fly to right by Wilcox to put Grantsville within striking distance, but the Cowboys stranded two runners in scoring position over the final three innings and couldn’t come up with the runs they needed late in the contest.

“Sometimes, you lose,” Perkins said. “I hope they take that motivation and use it in the offseason to get better. We just didn’t execute the little things — getting bunts down, moving runners over. When we get guys on, we hit balls right at kids. It just happens. It’s baseball. It’s hard to explain. It’s the game we live in.”

Judge Memorial scored two crucial insurance runs in the top of the sixth inning on an RBI single by Luke Borgmeier and a sac fly to center by Paul. Borgmeier was the game’s winning pitcher, allowing three runs on six hits with six strikeouts, one walk and two hit batters in five innings. Connor McTeague earned the save for the Bulldogs, pitching two scoreless innings with one hit allowed and one hit batter.

Merrill went 2-for-2 at the plate and Riding was 2-for-4. Thursday’s loss was the final game for those two, along with fellow seniors Capell, Parker Bird and Maison Silva.

“I feel like they all became better people in our program, and I’m proud of that,” Perkins said. “Nobody will ever take that (2018) state championship or those two region championships from them.”

Judge Memorial was eliminated from the tournament later Thursday with a loss to Juab. Richfield won the Class 3A championship Saturday, beating Summit Academy 9-3 in the title game.