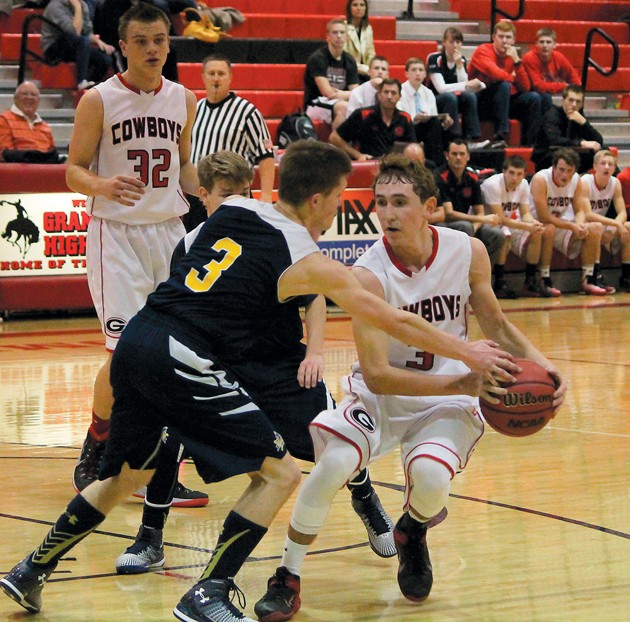 Grantsville guard Cameron Potter keeps the ball away from Rockwell’s Travis Jenson in Friday’s 82-46 win over the Marshals.

Late in the second quarter of Friday’s non-region game against Rockwell, the Grantsville boys basketball team appeared to be just going through the motions against the overmatched Marshals.

Cowboys head coach Bryan Detweiler wanted more out of his team, however, showing his displeasure during a timeout as the first half wound down.

His players took their coach’s words to heart, outscoring Rockwell 29-13 in the third quarter en route to an 82-46 victory.

“We were playing a team that I think we were a lot better than, and we were kind of playing down to their level,” said Grantsville center Aaron Harrison, who had 13 of his game-high 20 points in the third quarter. “We’ve got to turn it on the whole game. We can’t afford to be taking plays off.”

Grantsville (3-3) picked up its third consecutive win with a balanced effort, as 12 of the 13 Cowboys who saw action in the game scored. Detweiler put his starters on the bench for the entire fourth quarter, enabling him to get everyone on the roster some playing time.

“Those guys work hard in practice every day,” Detweiler said. “To get rewarded with some varsity time, that’s big for them. I think it’s critical to get them time, because they’re our future. The more minutes they can get and the more comfortable they can get with playing varsity basketball, the better off we’ll be in the long run.”

Grantsville never truly was challenged by the Class 2A Marshals (1-4). The Cowboys sprinted out to an 11-2 lead on a pair of 3-pointers by Tyson Elfors and another from Braden Sandberg. They stretched the lead to as many as 17 before settling for a 23-8 advantage after one quarter.

The Cowboys seemed to take their foot off the gas in the second quarter, allowing Rockwell to hang around. The Marshals closed the gap to 30-18 on a basket by Travis Jenson with 2:31 left in the opening half, leading Detweiler to ask his team to put forth a better effort during a timeout.

Grantsville responded by outscoring Rockwell 9-4 over the final two and a half minutes of the quarter to take a 39-22 halftime lead.

In the third quarter, the Cowboys began to take advantage of the undersized Marshals, pounding the ball inside to the 6-foot-6 Harrison and his backup, 6-foot-3 sophomore Jonah Bartley.

The result was a 16-5 Grantsville run that put the Cowboys ahead 55-27. By the time reserve guard Christian Kelley converted on a jumper as time expired, Grantsville was ahead 68-35.

“I think we woke up and came to play then,” Detweiler said. “I think we started out a little bit sluggish, but we got things going there, especially in the second half. We utilized our advantage down there on the block and got some easy baskets.”

Cameron Potter had 14 points in the win for Grantsville, while Sandberg had 11 and Elfors added 10. Bartley had seven points off the bench.

Jenson led Rockwell with 17 points, and Ben Johnson added 13 for the Marshals, who converted on just 13 field-goal attempts to Grantsville’s 32.

The Cowboys will play host to Ogden on Wednesday before a two-game road trip to Morgan and Union on Friday and Saturday.

“We’re on a three-game winning streak, so we’ll take that into (this) week and go play some basketball,” Detweiler said.