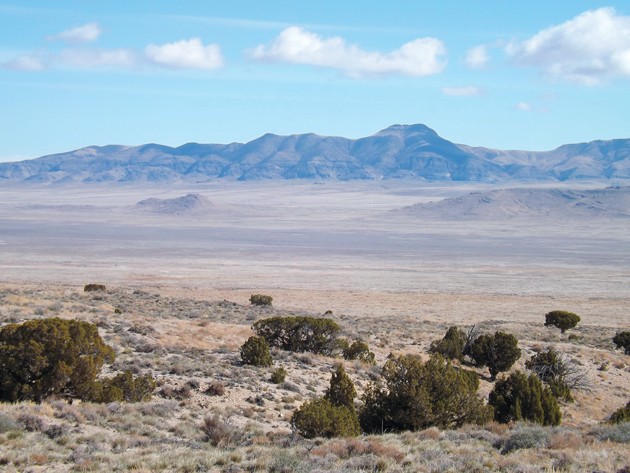 In the Great American Desert, which is what Utah’s west desert was called during the 1800s, there are some lesser-known geographic features that get little recognition and even fewer visitors.

While they may seem boring to some, they are exactly the type of places I like to visit. They offer solitude and feel as if the hills or draws have not been trodden by man for centuries, if ever.

Which is why I drove west to the Grassy Mountains last weekend. Every time I travel to Wendover, I have looked at these lonely mountains and wondered what it would be like to explore them. The Grassy Mountains form the western border of Puddle Valley, which is hemmed in on the east by the blank limestone stare of the Lakeside Mountains.

Puddle Valley is a large desert landform that measures 24 miles north to south and about 9 miles east to west. There are interesting knolls and a minor range of hills known as “Skunk Ridge.”

Puddle Valley has an average elevation of about 4,400 feet and is aptly named, since it used to be covered by some of the deepest parts of Lake Bonneville. When that great lake started to dry up, I imagine a sizable body of water remained in Puddle Valley and then eventually vanished.

Lake bench terraces are clearly visible on the Grassy Mountains and the entire area has a mud cake, dried-up appearance even though Lake Bonneville has been gone for thousands of years. In geologic time, the disappearance of the lake is a recent occurrence, which explains why evidence of its existence is still plainly visible.

To get to the Grassy Mountains and Puddle Valley, I followed Interstate 80 west past Delle and then took exit 62, which reads “Lakeside/Military Area.” It took 35 minutes to reach the exit from my house in Stansbury Park, so it is not too far from Tooele Valley.

Continuing west, the dirt road follows a fence line piled high with tumbleweeds and then heads across Puddle Valley to the north end of the Grassy Mountains. The gravel road is good, but I’m sure when it rains it can be treacherous. When it’s dry, great plumes of dust rise into the air behind your vehicle.

It looks as though a large number of livestock frequent the valley, because the road is severely trampled. There is little vegetation on the valley floor. It is a mournful place, yet the desert view is impressive. To the south, a tortured limestone reef rises out of the ground and marks the start of the Cedar Mountain Range.

It was sunny and 40 degrees as I drove across Puddle Valley. Along the way, I thought about the explorers and emigrants who passed just south of here. As the road begins to climb the east bench of the Grassy Mountains, the dirt becomes deep and powdery. I can’t imagine how hard it would have been to move a heavy wagon, with narrow steel-rimmed wheels, through this terrain.

As you get to the base of a ridge, there are a few scrubby junipers, but higher up under the rim of a flat top, there are some good stands of junipers. There are also a few rock outcrops on the side of the road as it climbs toward the pass. The pass is a good place to stop and survey the scene of the Great Salt Lake Desert. There’s also an interesting “Castle Rock” that I noticed and decided to explore later.

The road becomes heavily graveled near the pass, but it’s easily passable. The pass is at an elevation of 5,090 feet, and when you top out on it, you have a stunning view across the desert to famous “Pilot Peak,” which guided emigrants to its springs long ago.

To the south, the snow-capped Deep Creek Mountains appear on the horizon. If you continue west from the pass, you will cross “Ripple Valley” and end up in the Grayback Hills. The Graybacks are famous because John C. Fremont, the Donner Party, and other explorers and emigrants crossed that last obstacle before venturing out onto the desert with Pilot Peak as a guide. I decided to save the Graybacks for another day.

I looked north from the pass and decided if someone was looking for a hike to get the heart pounding, they could park here and hike a 4X4 trail that heads north up a steep incline between two knolls and then summits onto a 5,948-foot-high peak that looms over the area. Due to an ankle injury I sustained that morning, I saved this steeper hill for another day and instead explored a rock formation and a flat-cap rock to the south of the pass.

I descended the pass back to the east and then headed north on an old two-track road along the base of a Lake Bonneville terrace to a valley overlook where a sheepherder had located his white line trailer. There were several horses picketed at this lonesome but picturesque outpost, and three dogs charged out to challenge my approach.

Some would find the solitary life of the sheepherder intolerable, but in another life, it would have suited me. Each day, these modern-day cowboys emerge from their trailers and engage in the hard work they have chosen. The sun, moon, stars and desert are theirs alone. For me, the giant, silent nothingness of the desert is enchanting.

I left the sheep camp and backtracked to the main road, noticing how the washes were choked with gravel and stones that have eroded down from the terraces by flash floods over the ages. I noticed an old corral that occupies a natural nook in a ridge and parked my vehicle there — to continue this story for next week’s column.

Warning: Travel and hike desert back country roads at your own risk. If you venture into these areas, you must have a good map, plenty of water, fuel and a spare tire. Inquire about road conditions from the Bureau of Land Management – Salt Lake District Office at 801- 977-4300. Always tell someone where you are going. Cell phones don’t work in many parts of the desert, so be prepared.