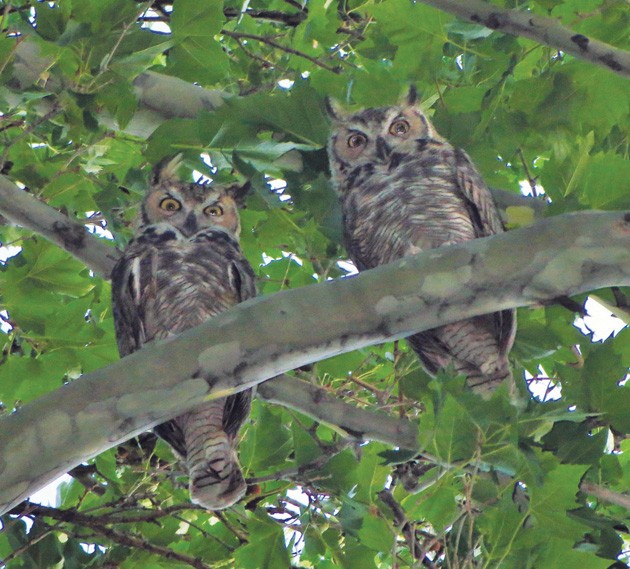 A pair of great horned owls was found roosting in a Tooele County tree. The owls were only photographed and left undisturbed.

Because of its fierce hunting skills and unnerved pursuit against a wide variety of prey, the great horned owl was given the nickname “tiger owl” and other similar nicknames because of its appetite for large prey.

Hunting during dusk and night, the great horned owl mostly feeds on several species of rodents, but has been known to hunt more than 50 different species of birds, including songbirds and other raptor birds. Hunted bird species and other prey include swans, ducks, geese, gulls, crows, chickens, grouse, herons, hawks, catfish, snakes, frogs, toads, crayfish, skunks, porcupines and cats if an owl gets the opportunity. When prey is too large to be swallowed whole, great horned owls tear their prey into smaller bits using their sharp beaks. Other times when prey is too large to finish eating at once, the remains are occasionally cached away for later.

The great horned owl has several advantages aiding it in hunting prey, including size, camouflage, senses and strength. While its size can vary from 18 to 25 inches with a wingspan of three to nearly five feet, it still can be difficult to locate when roosting among the trees and foliage. Its concealing color-plumage can range from grey, black, brown, beige and white with spotted coloring. During the night, the great horned owl’s bright yellow eyes and keen sense of hearing both are combatively used to locate prey in the dark. Although it cannot move its eyes in their sockets, it can turn its head more than 180 degrees in any direction. As for strength capabilities, its talons possess a deadly grasp which are used for gripping and breaking the spines of animals. The required force of strength to open the great horned owl’s talons is 28 pounds.

Great horned owls are found year-round in Utah and can be seen inhabiting mountainous areas, swamp land, deserts, deciduous forests, coniferous forests and mixed forests as well as urban locations on occasion. Their lifespan is approximately 13 years. Great horned owls are monogamous and genders can be differentiated by size and sound. While females tend to be larger than males, males possess a deeper hooting call rather than the females’ higher pitched hoot. In fact, males use their hoots to attract females during mating season, and pairs often call out to each other in a duet of hoots.