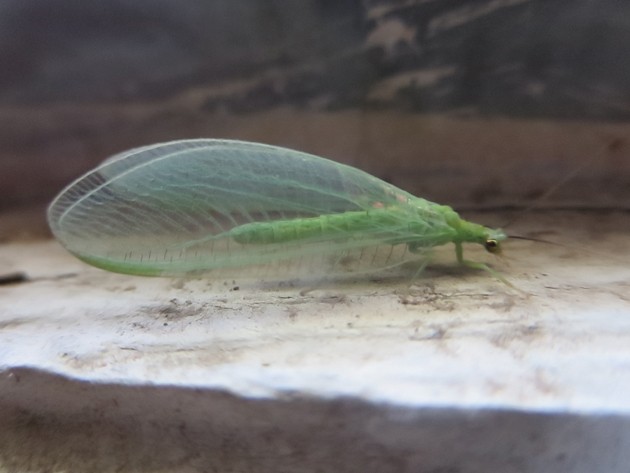 An adult green lacewing rests near a window.

June 25, 2015
Green lacewings are peaceful as adults, but bloodthirsty as larvae

Adult green lacewings are habitually and physically unintimidating, for they are fragile, soft-bodied insects that primarily feed on honeydew, pollen and flower nectar. They also inhabit areas where they can camouflage themselves so they can keep away from predators. As larvae, however, they are more unnerving for their predatory hunting stage. They are more aggressive and bloodthirsty for smaller insects and eggs, including aphids, caterpillars, butterfly eggs, beetles, leafhoppers, flies, mites and even on one another when food is scarce.

Primarily inhabiting the outskirts of forests, fields, landscapes and gardens, the green lacewing uses its colorations to conceal itself amongst vegetation, primarily leaves and stems. While it varies with the species, green lacewings usually possess a pale green or yellow body coloration, with gold or copper-colored eyes, and long clear wings with noticeably visible green veins. They can grow up to a half-inch long and live from six weeks to a year. They are nocturnal as adults so they can usually be seen around outdoor lighting.

Adult green lacewings have several predators and though camouflage is their primary defense mechanism, they have other ways to escape predators. Some species will avoid being eaten by listening to the ultrasound calls of bats, causing them to stop flying in midair and drop safely to the ground. Green lacewings have also been known for escaping spider webs. Because of their lightness, they often do not cause vibrations on the webs. Instead of struggling, they tactfully bite away the web strands and detangle their legs and antennae. After freeing their limbs and only caught by their wings, they simply fall away from the web. Other species have also been known to emit a foul odor from their thorax.

With four complete metamorphic stages — egg, larvae, pupae and adulthood — an already mated female will lay up to 100 to 200 eggs singly or in clusters on plants. Green lacewing eggs are usually laid where aphid groups are located, and the eggs are attached to the plant by a silken stalk to hang. After hatching and molting takes place, the larvae immediately begin devouring prey, and will remain in this stage for up to one to three weeks.

Because of the larvae’s excessive appetite for plant-damaging insects, they are often highly desired to have present amongst gardens and yards. Although larvae have been known to bite humans, they are harmless and do so usually because they are hungry.

As larvae, they have been described to look like tiny alligators with pale colorations and dark markings. They are physically flat and possess large hooked mandibles with distinct legs. Their size is a little bit under a half inch and they have been given the nicknames “aphid wolf” and “aphid lion.” Being very sensitive to touch and weak in other senses, the larvae lurks around plants in an aimless sort of way while swaying its head back and forth. Once the larvae collide with prey, it grabs and clutches onto it while a digestive substance secretes from its jaws into the prey. The prey’s insides are then liquefied so they can be suckled away by the larvae.