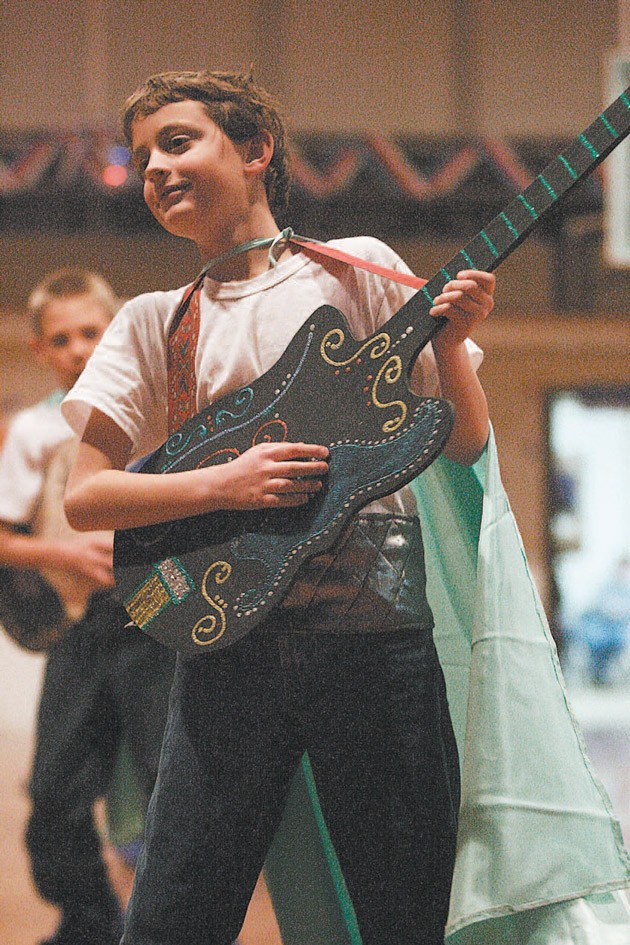 “Aint nothing but a hound dog”, Grantsville Elementary student Timothy Kelley and other 5th graders honor Elvis during part of their “I Love America” assembly Wednesday morning.

It’s a memory that never dies — performing in the Grantsville Elementary School’s 5th-grade program called I Love America. At least that’s what teens and even adults who performed in the annual program years ago say.

“It’s fun,” said teacher Kenna Aagard, “when someone comes back to watch the annual program and says to a teacher afterward, ‘I played the part of such and such when I was in 5th grade.’”

About 150 GES Grizzlies presented their annual patriotic program Wednesday and Thursday. (The last performance will begin in the school’s gym at 6:30 p.m. Feb. 17.) The kids have memorized and sing with vigor and emotion a myriad of songs about America and the freedoms Americans enjoy.

That feeling of patriotic emotion seems to carry over to the audience as they listen and watch intently as the students explain the founding of America, the drafting and signing of the Declaration of Independence, the meaning of our great Statue of Liberty, and the dreams immigrants had as they left their homelands to come to America.

“I love to see the children, with hands placed upon their hearts,” the 5th-graders sing. “Many different cultures I can see, they came with hopes to be free.”

Reminding the audience that it was 1492 when Christopher Columbus sailed to America, the kids go on to explain how Betsy Ross made the U.S. flag.

The 5th graders tell their audience about the Preamble of the Constitution which brought together the first colonies of this country. They explain the 10 Amendments, and tell the audience that in 1791, the Bill of Rights, which gives all Americans freedom, was added.

Following a heart-rending song about the Statue of Liberty, the kids’ voices blend in harmony as they pay tribute to representatives of the National Guard, police officers, volunteer firefighters, EMTs and those in the military by singing, “Someone cries out for help, and you answer the call. Heroes who give it your all, to save someone’s life. That is the task that you give every day. American heroes, you will always be, forever and forever in our history.”

Paying tribute to three local “unsung heroes,” the kids honor Grantsville Police Officers Dave Aagard and Brent Rowley. Aagard has taken on the assignment of serving as the police officer at all four Grantsville schools. Along with Rowley, Aagard teaches the Drug Abuse Resistance Education (DARE) program at GES. Aagard was chosen as the Utah DARE police officer of the year for 2004.

Also honored as a “unsung hero” is GES teacher Lisa Arnold who serves as a volunteer firefighter for Tooele City.

Young boys and girls dressed in military uniforms represent-ing the Air Force, Army, Navy and Marines step forward and salute when their military service branch is named in a medley of military tunes.

5th-grader Nika Titmus plays the part of the Statue of Liberty this year. And Kyle Grow seems to especially touch the hearts of the audience with his emotional portrayal of Martin Luther King.

Closing the program, the students sing “God Bless America,” and “I’m Proud to be an American.” Since the songs have been memorized by each 5thgrader, it’s no doubt the words and tunes will remain in their hearts forever.

“The I Love America program is something GES students look forward to bringing to the community,” said teacher Kenna Aagard. “It’s a program which each participant, as well as those in the audience, will hopefully recall with fondness for many years to come.”