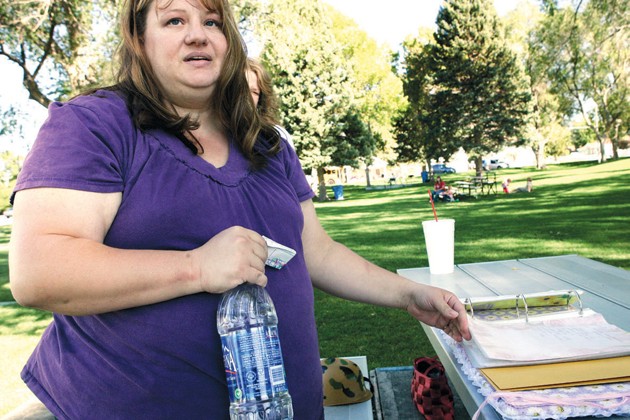 Roshelle Thornock shows a scrapbook she made after the death of her daughter during a Healing Hearts group meeting at Tooele City Park Wednesday afternoon. Thornock hopes that the group will help those who’ve lost a child.

September 24, 2009
Group hopes to heal hearts broken by a loss

The light purple and red fabric- covered scrapbooks held photos, memories and stories of their lost loved ones. The front of one book held a photo of a toddler while a small group of women talked about how they’re coping with the loss of a child at Tooele City Park on Wednesday afternoon.

Tooele residents Tammie Brown and Roshelle Thornock decided to start the group Healing Hearts in an effort to do just that — help heal hearts broken by the death of a child. They had their first meeting last Wednesday and another one yesterday in hopes of attracting mothers, family and friends — who are supportive — of anyone who’s lost a child, delivered a stillborn or had a miscarriage. The group is designed to allow people to talk about their feelings and what struggles they’re going through.

“They tell you to talk to counselors [after a loss] but they don’t know what we’re going through,” Brown said. “We thought if it was people who had been there [before], we could get out and help as many people as we can.”

Both Brown and Thornock have lost young children. Brown had a stillborn boy in December 2007. Thornock’s 18-month-old daughter died of interstitial pneumonia in March 2006. “It’s strange when you go through this because tons of people come out of the woodwork,” said Brown, who has five children. “Everyone’s different and what they go through is a lot different.”

According to Thornock, Brown had approached her a week before school started and they talked about quite a few people they know who’ve lost children. Thornock went to grief counseling at Valley Mental Health but the program has since been disbanded.

Thornock added that not everyone has the ability to go into Salt Lake City for this type of help. So the two, who’ve been friends since high school, decided to start their own group.

“We started talking again a year and a half ago and realized we both had a loss,” said Thornock, who has seven children. “She wanted to do the same thing for other people. We’re still feeling it out and aren’t exactly sure what we’re doing other than talking.”

Thornock is quick to point out that they aren’t professionals and aren’t offering that kind of advice. They’re there for support and to lend a listening ear.

“We can’t offer any professional advice, except we’ve been through it ourselves,” Thornock said. “I know there’s different situations with each child death, miscarriage or stillborn. Even though situations are different, a lot of those feelings and processes are pretty much the same. We can still identify with a lot of those feelings.” Simply talking with others and using coping skills has helped Thornock deal with her daughter’s death.

“I feel like I’m in an OK place with my daughter’s death; I still miss her everyday and I still have my bad days,” Thornock said. “But I guess it feels good that you’re not alone and to talk to somebody else and help them feel better, that makes you feel better.”

She added that they’ve incorporated these coping skills of talking along with planting a tree, writing a poem or making a memory scrapbook to help deal with a loss.

After their first two meetings, only person has shown up. “It’s been a slow start and we’re trying to figure out a better time for people with our families and see what works for everybody,” Brown said.

Janet Brondum has been to both group meetings so far and heard about it from a friend who’d read about it on a flyer. Brondum, also of Tooele, had a miscarriage — her sixth — a few months ago when she was four months along.

“This is a very positive thing,” she said about the group. While the weather is good, Healing Hearts is meeting at the Tooele City Park. Although no definite dates or times are set, they have been meeting for about an hour on Wednesday afternoons. Thornock said they want to keep this group free and are looking for a place to hold meetings once the weather cools down.

“I really do hope this group helps somebody,” Thornock said.