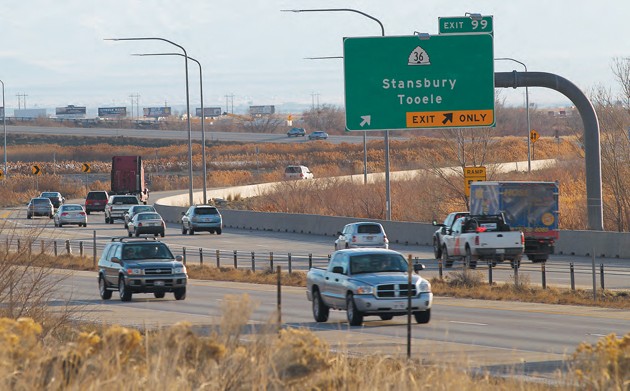 Drivers move along the Stansbury Tooele exit on I-80 Monday evening. The state legislature approved a bill that will create a speed limit test section of 80 miles per hour on I-80.

The 2013 Utah Legislature season is over, and Tooele County residents may notice changes in gun laws and how fast they’re allowed to drive on I-80.

Gov. Gary Herbert still has to sign the bills passed by the House of Representatives and the Senate.

Those stretches of road will be surveyed to determine the best portions for the increased speed limit, which would likely only apply to long, clear, straight sections, not ones with any significant visual obstruction or curvature.

Portions of I-15 in central and southern Utah have had speed limits of 80 mph since 2008. The resulting favorable safety study of those portions brought about the proposal for more faster sections.

In other words, if an employee of a governmental entity with information about concealed carry permit holders divulges that information, they would face a class A misdemeanor.

HB 121, Firearms Safe Harbor, is also awaiting a signature by the governor. The bill authorizes a cohabitant to voluntarily hand over a firearm to law enforcement for 60 days if the person believes another person they live with is an immediate threat.

SB 80, which establishes a procedure for clearing restrictions from people who are restricted from owning a concealed weapon because of a disability, passed slightly less decisively among legislators, with a 23-3-3 vote by the Senate on March 5 and a 63-0-12 vote in the House on Thursday.

The procedure involves examining the reasons for a person’s restriction — mental health issues, the circumstances surrounding those issues, the amount of risk a person is to those around them — and whether removing that restriction would be contrary to public safety.

Most controversial, though, is HB 76, which passed 51-18-6 in the House on March 1 and 22-7-0 in the Senate on March 13. The Concealed Carry Amendments would allow a person 21 and over who is legally allowed to own a firearm, to be able to carry it concealed or openly without a permit.

Some exceptions still apply, including carrying firearms on or about elementary or secondary school premises in some cases. Several groups have protested the bill, including Utah Parents Against Gun Violence, the League of Women Voters and the Alliance for a Better Utah.

April 3 is the deadline for the governor to sign the bills, veto them, or let them become law without his signature.