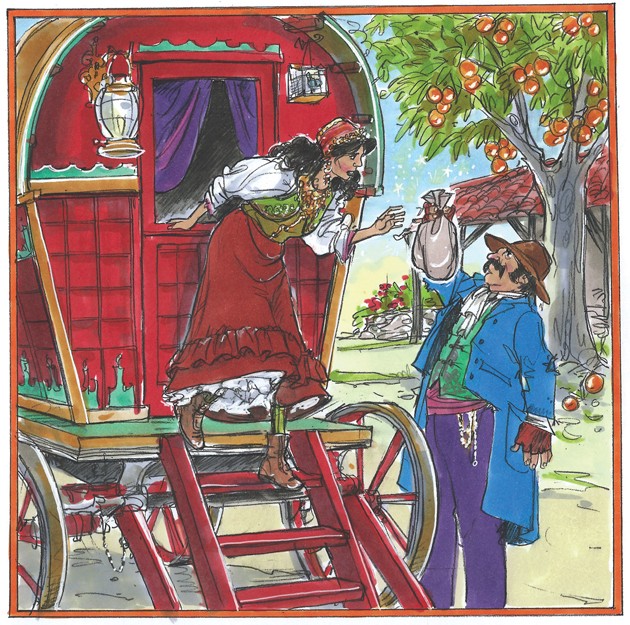 Once upon a time, a prince told his parents he must marry the most beautiful woman in the world. He would travel the world to find her.

The prince rode over mountains, across valleys, through villages and cities and towns. One day, he came to a fountain, and there he stopped to take a drink. As he bent over, he saw three oranges reflected in the water. He turned and looked up to find an orange tree. Three exquisite oranges hung from the lowest branch.

These looked so delicious that the prince could not resist, and he reached up and plucked all three.

He cut the first one in half, and as he did, a beautiful young woman appeared before him. He gasped at the sight.

“I have no bread,” the prince answered.

She shook her head. “Then I shall return to my orange,” and she vanished. In his hand, the prince held the orange — whole again.

Naturally, he quickly cut into the second orange. A second young woman stepped from inside. She was even lovelier than the first.

Again the prince was nearly breathless with wonder, but he shook his head and said, “I have no bread.”

“Then I shall return to my orange,” the woman said, and so she did.

The prince began to think. He decided that he must find some bread in case a third beauty appeared. Just as he was plotting where to go to find some, a gypsy passed by pulling a cart overflowing with pots and pans, canvas and clothes, bottles and baskets.

The prince called out, “Good day, my friend.”

“Good day to you,” replied the gypsy.

“Do you have any bread in your cart?” asked the prince. “If you do, I will pay you handsomely for some.”

The gypsy smiled. “Of course,” and he handed over a sweet polvoron, and the prince paid him generously with a pouch full of gold coins.

Then the prince sliced open the third orange.

To his delight — and to the gypsy’s astonishment — the most beautiful woman in the world stepped out from inside.

The prince quickly handed over the polvoron, and when he did, the woman said, “Thank you. Now you may ask of me anything you wish.”

“Marry me,” the prince said. “Marry me and I shall be the happiest man on earth.”

Naturally, the woman agreed. But when the prince noticed that her garments were tattered and worn, he knew he must find her a proper dress to wear to come to the palace.

“Wait here while I procure a gown for you,” he said.

The prince rode off, leaving the woman behind with the gypsy.

All this time, the gypsy’s daughter had been asleep inside the cart, under a mountain of blankets. Just at that moment the young woman awoke, and when she saw the prince riding away, she became curious.

“Who was that?” she asked her father.

The man told his daughter everything that had happened. He showed her the bag of gold.

“Imagine how much more there is than that,” she muttered to herself.

With that, the gypsy’s daughter decided she must marry the prince. Secretly, she devised a plot.

She turned to the young woman standing by the orange and said, “Let me comb your hair so you will be even more beautiful when the prince returns. A bride must always look her best.”

The beautiful woman transformed into a dove.

The gypsy’s daughter then hurriedly dressed in the other woman’s clothes and took her place standing beside the orange.

When the prince returned and saw this woman, he was surprised to see she looked somewhat different. “I think the sun must have burned your skin,” he said. “Let us hurry to the palace where you will be protected and loved.”

The prince took the woman to the palace, and there he married her.

But the new princess was cruel and greedy, and the prince’s life was not happy.

One year after the wedding, a dove landed in the royal garden, where the gardener was turning over the soil to protect the seeds for the coming winter.

“How are the princess and his wife?” the dove asked the gardener.

“He often weeps,” said the gardener. “I don’t imagine he is very happy.”

The dove flew away, but she returned the next day and the next. Each day she asked about the prince.

At last, the gardener told the prince about the dove, and when the prince heard the story, he knew he must meet this dove.

“Do whatever you can to catch the bird,” he demanded.

The next day, when the dove appeared, the gardener captured her and carried her to the prince.

The moment he saw the creature, the prince was fascinated by it. He began to pet the dove, and as he did, he felt a pin in its head. He carefully removed it, and when he did, the dove transformed at once into the beautiful woman who’d appeared after he cut the orange.

She told the prince all that had happened.

When the prince heard the tale, he ordered his conniving wife expelled from the palace. “She cast a spell on my beloved and she must pay.”

Soon after, the prince’s scorned wife was sent away, left to forever wander the land aimlessly. The prince married the woman he’d first fallen in love with, and they lived happily ever after.