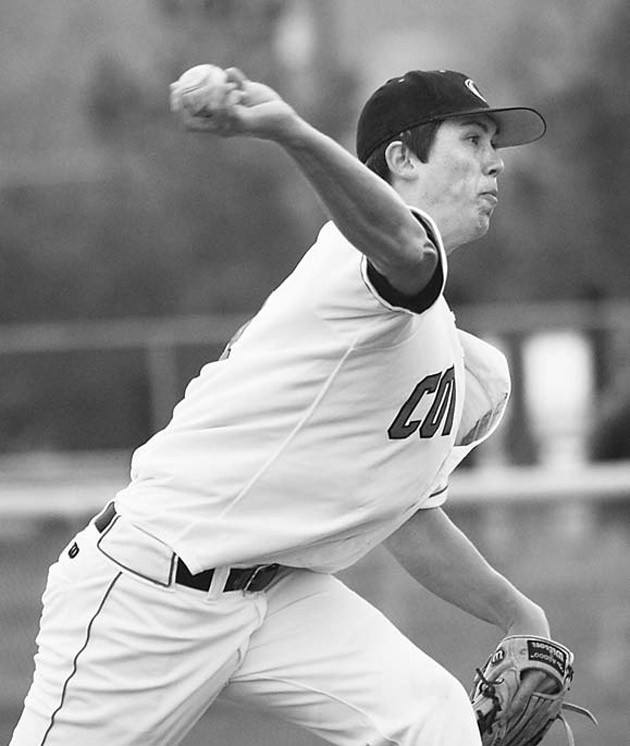 Grantsville’s Marcus Hamatake unloads a pitch in a game against Morgan. The Cowboy senior was nearly perfect Thursday against Ogden as the hurler came within a hit batsman of pitching a perfect game in a 17-0 drubbing of the Tigers at Lindquist Field. photography/Troy Boman

Marcus Hamatake turned in a nearly perfect performance on the mound Thursday and Ogden was the unfortunate victim to his flawless effort.

Only a hit batsman on the second batter of the game kept the Cowboy senior from tossing a perfect game at Lindquist Field.

Still, Hamatake unleashed his second no-hitter of the season, struck out nine and completely dominated the Tigers throughout the road affair.

Meanwhile, Grantsville gave the GHS hurler all the run production he would need in the three-run first, but tacked on a nine-run barrage in the second for good measure and the Cowboys rolled to a decisive 17-0 thumping of the Tigers Thursday in Ogden.

Ryan Willis, Derek Erickson and Kasey Cummings all pounded out two hits each to trigger the GHS barrage.

Grantsville hits the road to Ogden again today, this time to tangle with Ben Lomond at 3:30 p.m. in region action.

Grantsville Coach Travis McCluskey said he was encouraged with his team’s play in the drubbing of the Tigers on the road.

“I was very pleased,” McCluskey said. “We scored in every inning which was a good thing. We had some timely hitting and most of them were with runners on base.

The first inning really set the tone of the game. We also took advantage of their miscues in the second inning.

“Our forte in the past has been to kick it into cruise control after we get a big lead,” the coach added, “but we didn’t against Ogden. Marcus threw a fantastic game. I don’t care who it’s against, when you can come within one batter of a perfect game that is outstanding. It’s his second no-hitter of the season. It’s a pretty good accomplishment to throw two of those in one season. We didn’t have any errors behind him. It was a good all-around game for us, especially after the loss at Bear River the day before.”

Hamatake tossed a gem on the mound and the Cowboys broke out the offense to capture a decisive league triumph Thursday at Lindquist Field in Ogden.

Grantsville didn’t waste any time seizing command of the contest.

Heath Bleazard rapped a oneout single and stole second to race into scoring position. Chaz Fisher followed with a bunt and Erickson cracked a RBI double to aid the effort and put the Cowboys on the scoreboard. Kirk Fawson drew a walk to aid the rally and Hamatake drilled a two-run single to pad the advantage to 3-0 after one inning expired.

Little did Chace Stegen know that getting hit by a Hamatake pitch as the second batter in the game for the Tigers would spoil the Cowboy hurler’s bid for a perfect game. That was the one and only Ogden slugger to reach base in the five-inning affair.

The Cowboys exploded in the second stanza as well to seize a huge 12-0 advantage. Scott Arbon drew a walk to open the fateful frame and Matt Haddock reached on a Tiger fielding miscue. Willis smacked a two-run single and Bleazard reached on another Ogden error to chase home another Cowboy base runner. Fisher drew a walk and Erickson followed with a sacrifice fly to push home Willis. Fawson clubbed a run-scoring single and Hamatake drew a walk. Cummings ripped a RBI hit and Arbon drew his second walk of the inning to aid the effort.

Haddock rapped a sacrifice fly to push home Hamatake and Willis followed with a two-run triple to conclude the barrage and spot Grantsville a double digit edge.

Erickson clubbed a one-out double in the third, bolted for third on a passed ball and scored on a Fawson ground out to extend the margin to 13-0.

Cummings drew a walk in the fourth, raced to second and third on passed balls and scored on a fielder’s choice to build a 14-run lead.

Grantsville padded the advantage with three more tallies in the top of the fifth. Fisher and Dustin Jones drew consecutive walks to open the inning and Fawson smacked a single to load the bases. Hamatake drew a walk to force home Fisher, and Cummings followed with a two-run hit to complete the scoring in the 17-0 drubbing.

Bleazard and Hamatake produced one hit each while Riley Ford, Justin Hawkins, Jones, Garett Giles and Dallas Cox all contributed to the triumph.