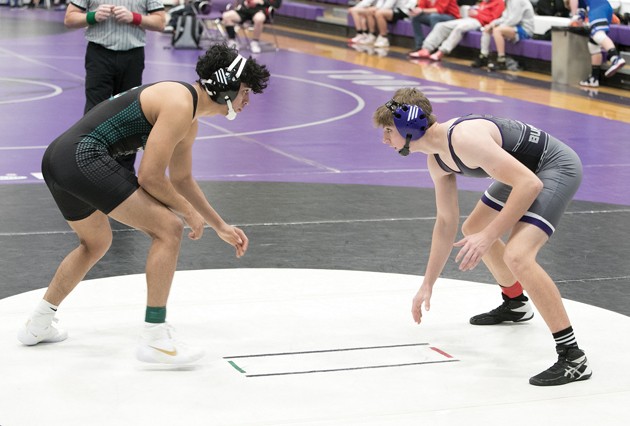 Tooele’s Ty Proctor (right) faces off against Green Canyon’s Josue Velez during a 152-pound match at the Best of the West Tournament on Jan. 9 at Tooele High School. Proctor finished third in his weight class at the Class 4A Division A tournament in St. George on Saturday, which earned him a spot in the state tournament on Feb. 20 in Richfield.

Nine Tooele grapplers to compete at 4A tourney ♦

The Tooele wrestling team came up against some of the best that Class 4A has to offer in the Division A tournament Friday and Saturday at Desert Hills High School in St. George.

Parker Hansen (106) and Chandler Yeck (285) will lead a contingent of nine Tooele wrestlers into the Class 4A state tournament, which will take place Feb. 20 at the Sevier Valley Center in Richfield. Hansen finished second with a 3-1 record, including a 13-second pin against Cedar Valley’s Kadan Davis in his first match and another pin against Eli Beiza of Crimson Cliffs in the quarterfinals. He beat Snow Canyon’s Asher Farr in a 7-4 decision before a tight 3-1 loss to Mountain Crest’s Easton Evans in the final.

Yeck also finished second, going 4-1 in his bracket with all four wins coming by pin. He took down Alex Cole of Crimson Cliffs in 1:05, followed by a 45-second win over Cedar City’s Jayson Ziegler. He beat Green Canyon’s Garrett Herzog in 1:44, and it took 5:04 for him to beat Desert Hills’ Chance Richins in the semifinals. His title run ended with a loss by pin to Crimson Cliffs’ Jason Ponausuia, who has a 25-1 record this season.

Ty Proctor put together an impressive run through the consolation bracket to finish third at 152 pounds after a second-round loss. He was 7-1 in the tournament, including 6-0 in elimination matches, with every match ending in a pin. His quickest victory came in his third consolation-bracket match — a 16-second triumph over Hurricane’s William Butterfield.

Mason Flygare (120) finished fourth after reaching the semifinal in impressive fashion, pinning Cedar City’s Kaden Gilbert in 11 seconds and Snow Canyon’s Brannon Wilson in 3:15. He reached the third-place match with a pin in 3:07 against Hurricane’s Kayleb Murphy in a consolation semifinal match. Cannon Manning (160) was also a fourth-place finisher, rolling through his first three matches with a pin and two major decisions before a tight 6-5 loss to Desert Hills’ Keagan Boyce in the semifinal round. He then pinned Boyce’s teammate, Christian Bolli, in 46 seconds to reach the third-place match.

Stoddard was 3-3 in the tournament and finished eighth, also qualifying for state.

The Class 4A state tournament will take place Feb. 20 at the Sevier Valley Center in Richfield. Besides being reduced from a two-day event to just one day, the tournament’s biggest change will see the semifinal losers automatically placed in the third-place match, rather than having to compete in the consolation bracket.