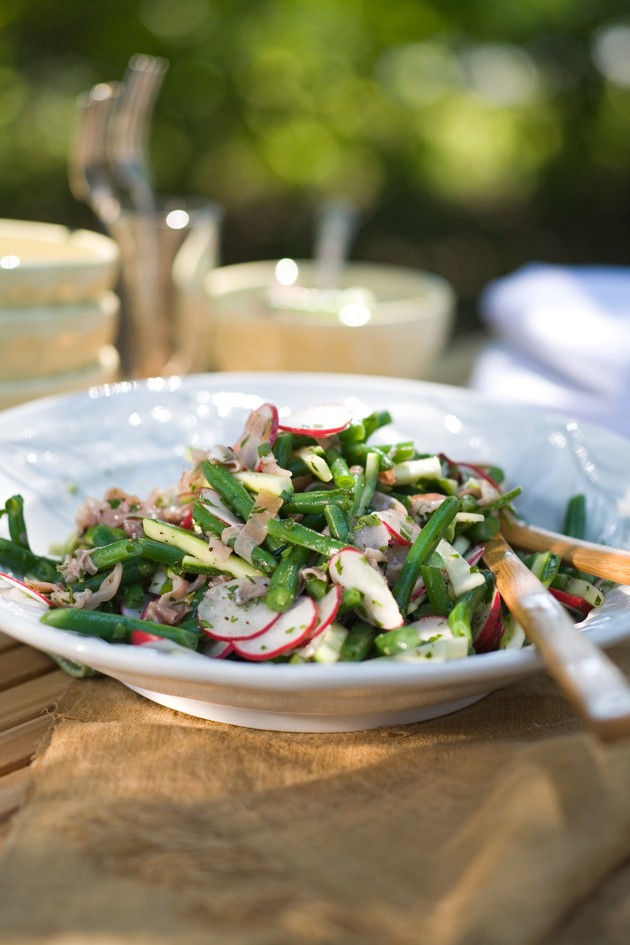 In French, the word for “bean” is haricot, and the word for “green” is vert. So if you’ve wondered whether haricots verts (Ah-ree-koh VERH) is just a gourmet way of saying “green beans,” the answer is yes, and no. The French cultivar is thinner than American varieties and has a tangy, more intense flavor. Some times of the year, haricots verts are prohibitively expensive (on a recent shopping trip, they were four dollars more per pound than regular green beans); you can substitute the standard variety with favorable results.

Native to Central America, haricots have been domesticated for 5,000 years, and numerous varieties were grown throughout the Americas by the time Europeans arrived.  Today, haricots are the most widely cultivated legume in Europe and North America, earning their other moniker, “common bean.” Some varieties are grown to be eaten in the pod; others, for their dried seed.

The Chinese Broad Bean and the Italian Fava are a different species, widespread in the Old World long before the haricot was “discovered.” Oh, and do you wonder what happened to Grandma’s “string beans”? For the most part, the strings have been bred out of them. The term “snap bean” comes from the sound the bean makes when snapped in half. Wax beans are a pale yellow variety of green bean.

The rich flavor and silky texture of prosciutto di Parma, the most famous of the Italian hams, makes a delicious addition to this summery salad.

1. Steam beans in steamer basket over boiling water until crisp-tender, 6 to 8 minutes. Empty into a colander and cool under cold running water. Drain well, pat dry with paper towels and transfer to a large bowl. Add remaining ingredients and toss to combine. Serves 4 to 6.