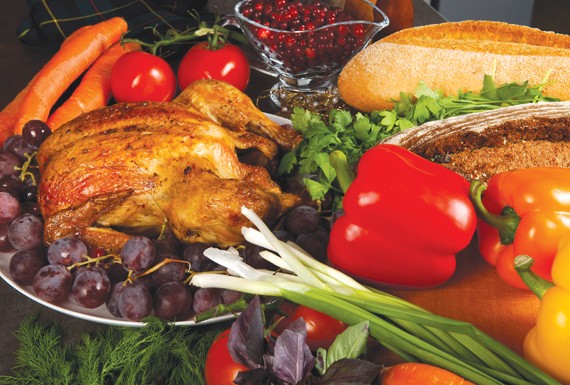 Thanksgiving, though often vilified, is potentially one of the healthiest meals of the year. Traditional foods such as turkey, sweet potatoes and pumpkin are jam-packed with vitamins and are relatively lean on fats and calories.

The way these foods are sometimes dressed and consumed, however, can sometimes lead to health pitfalls that last the rest of the holiday season and end in fitness-related resolutions at the end of the year, according to Malaena Toohey, a public health educator with the Tooele County Health Department. But it is possible to avoid packing on the pounds while enjoying the holiday, Toohey said.

“You can enjoy all of it,” Toohey said. “You don’t have to deprive yourself of any of it.”

The biggest key to a healthy Thanksgiving holiday, Toohey said, is portion control. The Mayo Clinic has estimated that the average American will eat about 4,000 calories for Thanksgiving this year — well above the recommended 1,200 to 3,000 daily calories. But it’s entirely possible to enjoy the holiday without overeating by choosing moderately-sized portions and eating slowly. Because it usually takes about 20 minutes for the body to register it has eaten enough, Toohey said, taking time to savor each bite is a good way to prevent overindulging.

“We forget about moderation,” Toohey said. “We eat more than we need. It’s the overeating and eating all day long that’s a problem.”

However, hope isn’t lost for those who do happen to go overboard on the holidays. The key to good health isn’t perfection, but overall consistency, according to Toohey.

There are some cooking tricks that can be employed, even at the last minute, to cut back on the amount of fat or calories served up at the Thanksgiving dinner table. To start, small platters of nuts, raw vegetables and low fat cheese make excellent appetizer alternatives. As with the rest of the meal, it’s important to watch portion sizes here, Toohey said. A handful of nuts is plenty.

For dinner, serving the turkey with au jus — the light, clear broth that usually comes with a French dip sandwich — instead of gravy is a good way to cut back on unnecessary fat, Toohey said. Traditional sides can also be adjusted slightly. Mashed potatoes can be made creamy with skim milk instead of whole. Vegetable sides can be sautéed in non-fat chicken broth or, even better, olive oil, instead of butter. And the sweet potatoes can be sweetened with pineapple, orange or apple juice with a little brown sugar.

Afterward, dessert is often best if limited to just a few options, as offering a variety of choices can make overindulgence more difficult to resist, Toohey said. A traditional pumpkin pie is an excellent choice, because, when made light on sugar, it’s naturally healthy. The star ingredient has only 30 calories per serving, and a whole host of vitamins and essential minerals.

Through all aspects of the meal, making smart choices about which ingredients to use can make a big difference in the long run, said Michelle Russell, a nutrition education assistant with the Utah State University Tooele extension. For example, if you’re buying a cream soup to use in a casserole, look for low-fat, non-fat or low sodium varieties. Use whole grains in rolls and stuffing and cut back on the sugar and fat included in desserts.

If there’s time before the meal, Toohey suggested trying to get some morning exercise in to boost metabolism before feasting. Even if there isn’t quite enough time for a trip to the gym, a short walk with a friend or a family game of football in the yard could be an excellent way to offset an extra serving of stuffing.

In addition to making time for physical activity, it can also help to plan out the day’s other meals with Thanksgiving dinner in mind, Russell said.

“If they’re going to have that really big meal, go light for the other meals,” she said.

Planning for leftovers can also help combat holiday weight gain, according to Toohey, who suggested refrigerating or freezing leftovers in single-serving portions. While one day of overindulgence may not impact overall health, she said, overeating for a week — or for the entire holiday season — can add a few pounds, which will be difficult to remove come January.

That being said, from a health perspective, Thanksgiving isn’t entirely bad news. Like pumpkin, many traditional holiday foods are actually remarkably healthy, given lean preparation and sensible portions. A cup of sweet potato boasts nearly 400 percent the average daily requirement of vitamin A, and a serving of cranberries contains 15 milligrams of vitamin C. Add lean white turkey, a whole wheat roll and perhaps a green salad, and this oft-disparaged feast can become a well-balanced, nutritionally complete meal.

Nutrition aside, there may be mental health benefits to Thanksgiving as well, Toohey said — gratitude has been shown to be an effective way to combat depression.

“I think people forget what the actual holiday is and focus on the food,” Toohey said. “But there are quite a few things with Thanksgiving that are good for the body.”