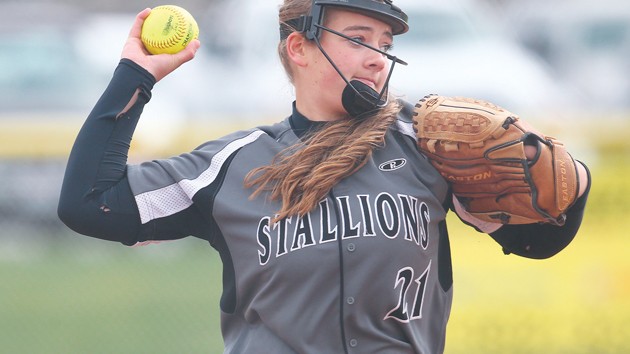 Stansbury sophomore pitcher Kimbri Herring wouldn’t let a lead-off double get her down, as she struck out nine Tooele Lady Buffaloes en route to a two-hit shutout and 9-0 victory for the Lady Stallions.

Tooele’s Trystin Crofts blasted a hit into the gap in left field for a double, and it seemed the Lady Buffs had a chance to get some early runs on the juggernaut Stallions.

However, Herring bounced back immediately to set down the next three hitters. She got Alysia Roybal to fly out, and then she struck out Alyssa Arslanian and Lauren Frailey to end the inning. That set the tone for the Lady Stallions to put together their third consecutive shutout.

“She’s the perfect pitcher because if she gives up a hit, she doesn’t really get rattled, and she stays pretty mellow,” said Stansbury coach Bridget Clinton about Herring’s pitching style and ability. “You’re going to give up hits, but it’s how you respond after that. They got a lead-off double to start the game, and to her it’s not big deal. She likes to pitch, and she wants the ball.”

Clinton said Herring dominated because she hit her spots and made the Lady Buffs miss. She said Herring has fun out in the pitcher’s circle, and she brings the perfect mentality for being a pitcher.

Tooele coach Melanie Nelson also pointed out Herring’s dominance, noting that the Lady Buffs couldn’t get the timing of her pitches down.

“If we had 14 innings in a game, we might be OK,” Nelson said. “Unfortunately we don’t, and we weren’t making adjustments fast enough. I don’t know if she’s any different than anybody we’ve seen. She did a great job, though. She kept us off balance.”

She said “hats off” to Herring for a great pitching performance, as well as to the Stallion hitters.

“These kids are great hitters,” Nelson said. “They deserve that credit. They jumped on every missed spot. They were expecting to hit, and they did. Hats off to them.”

The Lady Stallions took advantage of Tooele not scoring in the top of the first by scoring four runs. Janessa Bassett opened the bottom half of the inning with a bunt for a single, and Beth Chipman moved her over to second base with a sacrifice bunt. A wild pitch then allowed Bassett to move to third base. That’s when Katelyn Robinson blasted a hit to left field to score Bassett, and then Robinson followed up her RBI single by stealing second. Another wild pitch allowed Robinson to move to third. Karlee Manzione stepped in with a hit down the left-field line to score Robinson, and Manzione ended up at second. A third wild pitch allowed Manzione to move to third, and Anjalee Batchelor kept the hitting going with a double to right-center field. Jocelyn Kaufmann rounded out Stansbury’s scoring that inning with an RBI single to right-center field to send home Batchelor and make the score 4-0.

They had no problem continuing to score in the bottom of the second inning after a 1-2-3 top half by Herring and the Lady Stallion fielders. Robinson and Manzione both drew walks, and Batchelor blasted a triple to score them both. Kaufmann then smacked a hit up the middle to send home Batchelor and make the score 7-0.

Stansbury’s next two runs came in the bottom of the fourth inning. Chipman opened with a hit down the right-field line, and then a wild pitch allowed her to move to second. Robinson then hit a grounder that moved Chipman to third, and Manzione hit another grounder that scored Chipman, making the score 8-0. Batchelor picked up another hit and stole second, and Kaufmann blasted a double to center field to send Batchelor home yet again for a 9-0 lead.

This win marks the first time in the four-year history of the rivalry that Stansbury has beaten Tooele in softball.

“Tooele’s always had really good, competitive teams,” Clinton said. “Any time you’re playing a rivalry game, the kids are always a little bit charged for those. We liked to get a win today.”

The Bear River Bears came to Stansbury following Stansbury’s big rivalry win, and they stole the show with a 4-1 victory.

Bear River’s Jordan Theurer recorded five strikeouts and allowed just the one earned run to knock off the Stallions and pull into a first-place tie.

The two teams entered the top of the fifth inning tied at 1, and then the Bears capitalized on three errors by the Stallions. Bear River’s Kayla King blasted a hit to center field to reach first base, but Bassett misplayed the ball, which allowed King to advance to second. After a sacrifice hit to advance King to third, Brenna Hink hit an RBI single to give Bear River the lead. Bear River’s Kylie Larkin then reached first base after Herring reached the wrong way when trying to play a short hit. The bases loaded up on the next at-bat when Theurer sky-rocketed a ball toward left field. However, miscommunication between Robinson and Guymon allowed the ball to fall and load the bases. Herring then walked Bear River’s Bailey Trapp to make the score 3-1.

Bear River’s fourth run came in the top of the sixth inning. With a runner on first base, Hink drilled an RBI triple to score the run.

Stansbury’s best chance to score was in the bottom of the fifth when Kilee Christiansen led off with a double, and Bassett moved her over to third with a sacrifice hit. Chipman hit a grounder, and Christiansen made her way for the plate. The throw came in around the same time as Christiansen slid, and she was called out on the play.

Tooele had a big bounce-back win in a non-region game on the road against Olympus.

Tooele had a 4-1 lead going into the sixth inning, and then it scored five runs in both the sixth and seventh innings to come away with the road victory.

Stansbury next hosts Ogden on Wednesday before visiting Tooele on April 25. Tooele hosts Grantsville today at 3:30 p.m., and then it plays at Ogden on Friday. Tooele also plays at Morgan on Wednesday.