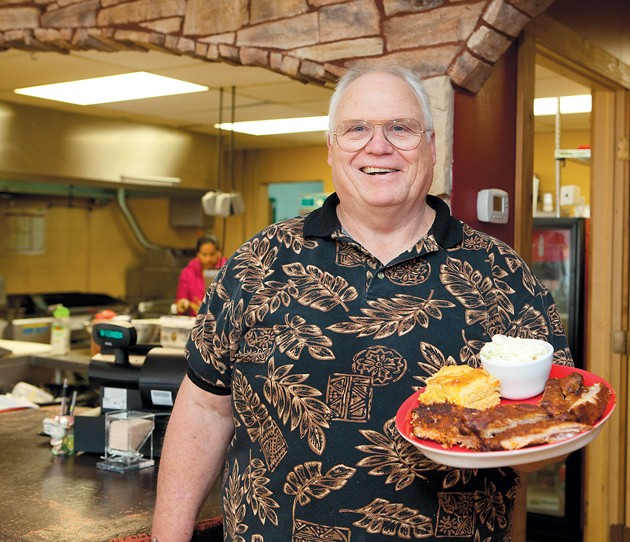 Jim Hoover holds a plate with a half rack of ribs, corn bread and a side of potato salad at his Hickory Grill restaurant in Grantsville. Hoover opened the doors for business a couple of weeks ago.

A few months after Grantsville lost its barbecue restaurant, the smokers in the same building are running again, with a new eatery aiming to provide down-home cooking.

Jim Hoover remembers growing up on a cattle ranch in Southern Arizona, where his grandmother also ran a cafe that served up big plates of food to satisfy big appetites.

“She fed a lot of the military guys at Fort Huachuca and a lot of the miners in the area. There was a lot of gold, silver and copper,” he said. “Every single plate she served was for very hard working, hungry men. So she served everybody, and just about everybody ordered the same thing: the Cattle Drive Breakfast.”

The feast of eggs, bacon, hashbrowns, pancakes and fresh biscuits was even brought out to the crew in the field, he said, in an old Ford Model T that was “just like the chuck wagon, only it had a motor on it.”

So, after retiring from a career as a long-haul trucker, Jim Hoover and his wife, Mary Jane, decided to open their own restaurant to recreate that feel of food and comfort.

“My wife and I looked for a year and a half all over the West for the right facility and the right situation,” he said. “I wanted a place that didn’t have a Denny’s and McDonalds on every corner.”

The stars seemed to align when they found the building at 196 W. Main Street in Grantsville, occupied by Richard’s Roundup BBQ until it closed last August.

“The whole town doesn’t have a place for a good, down-home country breakfast,” he said. “[The building] went on the market the same day my wife looked it up. So we called them up and we had a deal two days later. It was meant to be.”

And just like that, the Hickory Grill was born.

The Hoovers, who moved from Phoenix to start the restaurant, run it with their two sons, ages 24 and 22. On the menu is Hoovers’ take on his grandmother’s Cattle Drive Breakfast, as well as a host of other breakfast, barbecue and burger options.

Hoover said he buys all of the various meats himself to have a more active hand in the quality of the restaurant’s fare and to help keep costs down. All meat is smoked on the premises, he said, and all gravy and barbecue sauce is made daily in-house. There have been a few hiccups during the restaurant’s first couple of weeks of business, he said, but will smooth over once the place gets into the swing of things.

“You don’t own it, it owns you,” he said. “The entire staff has a new menu it has to learn. We make sure the food is good quality, but I won’t let something go out the door unless it’s just right.”

And once those rough patches are worked out, he said, they plan on staying put.

“Five years from now the portions and the quality of the food will be the same. It will not change,” he said. “It’s a nice change of the general trend from all restaurants. They start cutting the portions and putting the money in their pockets. I think it should be the other way around. I think if you’re dependable, reliable and have the same quality of food, customers will come back. We’re here for a long time.”