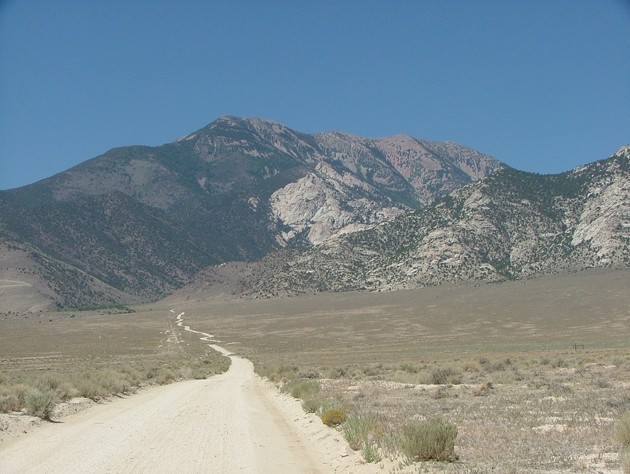 September 28, 2017
Hike to Ibapah Peak begins with a canyon adventure

The Deep Creek Mountains are the king peaks of Pony Express Trail country in western Tooele and Juab counties. This mountain range dominates the scenery from the north end of the Fish Springs Range, across Snake Valley, and past Boyd and Willow Creek Stations.

The highest peak — Ibapah Peak — rises to 12,087 feet, which is 7,758 feet higher than the 4,329-foot elevation of Willow Springs in tiny Callao. Due to this large, vertical relief, the Deep Creeks are an imposing sight to anyone who ventures into this area of Utah.

Opportunities for outdoor adventure abound in the Deep Creeks, but they are defined by the extreme, rugged and remote character of the mountains. There are no good roads, only rocky and rough two-track dirt paths that eventually and often sooner than naught, play out into single foot path trails that abruptly end.

With most mountains, the main attraction and destination for visitors is the high point of the range and the main canyon that provides access to it, which in this case is Ibapah Peak and Granite Creek Canyon. To get there from Tooele City you have two options: the easy one via Wendover and the more difficult but scenic and historic route on the Pony Express Trail.

You can follow state Route 36 north from Tooele City to Interstate 80 and proceed to West Wendover, Nevada, which is approximately 113 miles away.

Take exit #2 and then follow Wendover Boulevard through the Utah side of town. A short distance beyond the State Line, at the corner of the city park across the street from the Peppermill Casino, turn left and follow US 93 south for about 27 miles. Turn left onto Ibapah Road and proceed across the high desert bench of Ferguson/ White Horse Flat and through some low but interesting desert mountains approximately 28.5 miles to Deep Creek Valley. Look for the sign that identifies the Pony Express National Historic Trail on your left and then turn onto that road. Follow the Pony Express Trail for about 27 miles up and over the northern foothills of the Deep Creek Mountains, across Clifton Flat, down Overland Canyon and then southeast along the route to Callao.

The attraction of this route is you won’t beat up your vehicle across the rocky, unpaved Pony Express Trail from Vernon over 100 miles to the east. The down side is it will take you longer to get to where you need to go, and you will miss out on all the splendid adventure that the Pony Express Trail offers. I typically opt to follow SR-36 south from Tooele City to the Pony Express Trail north of Vernon and then follow that route west through the mountain passes and across the blank empty valleys of the West Desert to Callao.

At Callao the approaches from Vernon and Wendover meet. From Callao, head south on Gandy Road approximately 11 miles past the old Civilian Conservation Corps campsite to the Granite Creek Canyon turn off. Turn right onto this dusty, but surprisingly decent road and head toward the mountains. At first the vegetation is sparse with lots of dust and a few stunted sagebrush. But as you get closer to the mountains the sagebrush increases in size, there is grass, and ahead you can see dense pinyon and juniper trees with a course of cottonwoods rising along the creek.

Red Mountain looms large over the area and giant outcrops of slickrock granite, dotted with trees in places, dominate both sides of the canyon. As you enter Granite Creek Canyon proper, a giant granite tower looms over the entrance and you will begin to see some gambel oak. These incredible granite domes, pinnacles and towers tempt the brave and skilled rock climber. At the base of the rock tower, the road narrows into a well-defined two track, but is rockier and the foliage closes in to the point where owners of newer vehicles may not want to continue because the paint could get scratched. Therefore, this is a good area to park.

On my last visit to Granite Creek Canyon, my wife and I decided to take a primitive adventure for several days into the wilderness. We parked our vehicle near the base of the rock tower and then gathered all we would need and headed on foot into the wild. I had a heavy pack on my back with tentage, clothes and equipment. I had another pack on the front side loaded with food, water and other necessary items with a rifle laid across the top and a .45 on my hip. My wife was similarly loaded down. After about a mile or so we left the two-track road and bush whacked down to the edge of the creek and made our camp in a stand of aspen. We pitched our tent, got all settled in and then went exploring through the trees along the creek.

Our camp location was such that we could hear the water running over and between the giant granite boulders, which were shaded by mixed pinyon, juniper, fir, cottonwood and aspen forest. I sat on a boulder for a while in the shade of a pinyon pine, with its needles piled in low places, and several ancient Bonneville cutthroat trout in clear, cold pools of the creek. The peace and tranquility of that moment, on the edge of nowhere, is something I will never be able to adequately describe. The rock I was on was smooth, and part of the rest of the world, so I laid back, hands behind my head, and observed the piled granite across the canyon and wondered how many catamounts called this place home and if any were watching me.

The evenings were clear, star filled and cold with the constant tumble of the creek in the background and the swoosh of aspen leaves in the breeze. We got up early the first morning, loaded up our day packs, cached our valuables and then started toward Ibapah Peak. We walked to the end of vehicle travel on the dirt road near some gigantic boulders, and then followed the old track up the canyon. After a half mile, we came to a creek crossing where a large Douglas fir leans over and shades the creek at about 7,000 feet. The road continues to climb higher and the grass and trees increase. To the south the high slopes of Red Mountain are covered with talus rock rivers that disappear into the trees. At the lower edge of the woods, across open, grassy sagebrush meadows, mysterious pinnacles, boulders and water-streaked ledges of granite, rise out of the trees.

A thousand feet higher and two miles from the end of vehicle traffic, the trail crosses the tiny creek again as it heads northwest past some secluded primitive campsites complete with rock fire rings in aspens on the right. This area would make an outstanding first campsite for anyone attempting Ibapah Peak. Just a bit further the trail, now a footpath only, switches back steeply several times as it climbs an open grassy hill and then continues as a true pack trail up to the high open basin between 11,588 foot Red Mountain to the south, and 12,087 foot Ibapah Peak to the north.

Let’s stop there. In next week’s article, I will describe the ascent to the open basin, the hearty souls of the U.S. Coast & Geodetic Survey who lived on that plateau while operating heliographs on Ibapah Peak summit back in the late 1880s, and a recommended route for summiting Ibapah Peak.