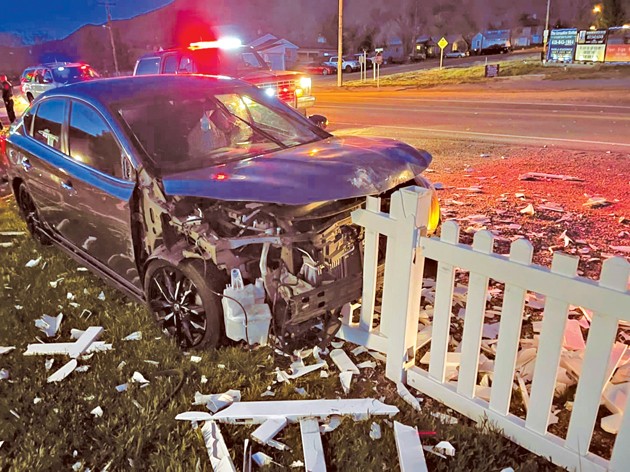 A car plowed into a fence on Main Street in Stockton after swerving to avoid a collision with a truck making a left turn on Thursday evening, May 12.

A truck and car accident in Stockton on Thursday, May 12 caused extensive damage to the car.

Stockton Police and Fire departments were dispatched around 9 p.m. on May 12, to a report of a vehicle that had left the roadway in the intersection of state Route 36 and Silver Avenue.

Upon arrival, first responders located a silver Nissan Sentra with a 21-year-old male driver, according to a press release from the Stockton Police Department

Although the airbags in the vehicle deployed, the male appeared to have no injuries and refused medical attention at the scene.

Based on the statements from the male, witnesses of the crash, and physical evidence found at the scene, the male driving the Sentra was traveling southbound on SR-36 and as he approached the intersection of Silver Avenue, a white truck turned left in front of him onto west Silver Avenue from northbound SR-36.

The driver of the Sentra swerved to the left to avoid the impact, then over-corrected to the right, lost control of the vehicle, drove off of the road, and crashed into a fence, according to the press release.

The white truck, which couldn’t be identified, did not stop at the scene of the accident.

Stockton Police are still reviewing camera footage as well as speaking to witnesses in the area in an attempt to locate the other vehicle.

The Sentra appears to be totaled.