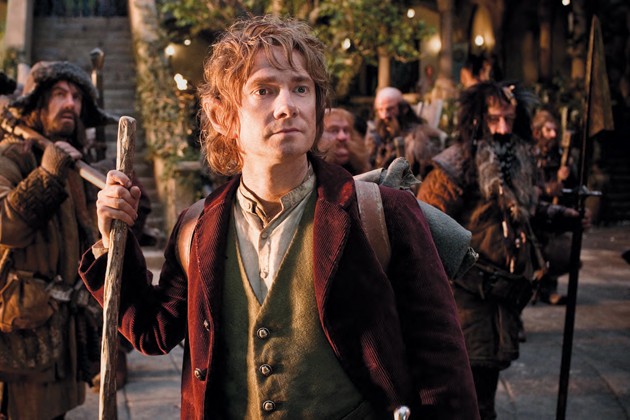 Martin Freeman stars as Bilbo Baggins, pictured with the band of dwarves he accompanies on a quest to reclaim their home, in “The Hobbit: An Unexpected Journey,” the first of three films based on the book by J.R.R. Tolkein. image courtesy Warner Bros

After the film adaptation of “The Hobbit” was announced, splitting the beloved novel into three parts, I don’t think I was alone in offering up this fervent prayer: “Please, Peter Jackson, please, don’t screw this up.”

Jackson’s return to Middle Earth to bring J.R.R. Tolkein’s classic book, a prequel of sorts to “The Lord of the Rings,” has pretty much fulfilled that plea — but it’s not perfect.

In this first third of “The Hobbit,” distinguished as “An Unexpected Journey,” Jackson shows how the dwarves lost their kingdom to the dragon Smaug before taking us back to the Shire with Old Bilbo (Ian Holm) and Frodo (Elijah Wood) just moments before we met them in 2001’s “The Fellowship of the Ring.” From there, Old Bilbo reminisces about his great adventure 60 years earlier.

As a much younger hobbit, Bilbo (Martin Freeman) was content with his quiet life in his hobbit hole but was jolted out of comfort after meeting Gandalf (Ian McKellen) and subsequently having 13 dwarves arrive at his humble abode. Gandalf recruits him to join the dwarves — because 13 is an unlucky number for a crew — in a quest to reclaim the dwarves’ stolen kingdom. Reluctantly, Bilbo agrees, and finds himself in much rougher circumstances than anyone would have thought fit for a hobbit more accustomed to making tea and scones than slaying dragons.

The adventures start early on in the journey. Three mountain trolls, who initially thought to have the group’s pack ponies as dinner, capture and try to cook the gang. After escaping from that scrape, the group find themselves chased by goblins and their vicious wolf-like mounts called wargs, from which they are delivered by elvish guards and enjoy a brief respite in the hidden elf kingdom Rivendell.

There, Elrond (Hugo Weaving), Galadriel (Cate Blanchette), Gandalf and Saruman (Christopher Lee) discuss the dwarves’ mission, which Elrond and Saruman decide is a foolish venture that should be prevented. But more pressing than the dwarves’ quest is the dark power rising in the land told to Gandalf by a fellow wizard, the somewhat peculiar Radagast (Sylvester McCoy).

Before the disapproving elves can stop them, though, the dwarves slip out of Rivendell and are back on their way. Caught in a boulder fight between rock giants, the dwarves and Bilbo seek refuge in a cave, where they are captured by goblins. Bilbo manages to escape, where he finds Gollum (Andy Serkis) — and the One Ring.

The performances are generally brilliant. Freeman’s portrayal of Bilbo stays true to the character both as represented in the book and by Holm, and Richard Armitage offers gruffness tempered with his birthright nobility as the leader of the dwarves, Thorin. The dwarves themselves all have discernible personalities, though none are quite the delightfully dwarvish character we found in Jonathan Rhys Davis’ Gimli in the “Lord of the Rings” trilogy.

McKellen, Blanchette, Weaving, Lee and, of course, Serkis reprise their roles from the trilogy as convincingly as earlier versions of their respective characters. McCoy’s odd, rabbit-drawn sleigh-traveling wizard is a welcome addition to the bunch, and should make fun viewing in the next two movies.

While largely remaining faithful to the text, Jackson does, of course, take some creative liberties, just as he did in “The Lord of the Rings” trilogy. In that case, though, he mostly took things out to make all three books and part of Tolkein’s lengthy appendix fit into three movies. Here, trying to make one book, with some additions from the appendix and other Tolkein works on Middle Earth, into three movies has required adding material in.

The greatest example of this is the creation of an enemy seeking revenge against the dwarves and particularly against Thorin. Jackson has also expounded upon events and sequences implied or brushed over in the text, and the pacing of the movie, especially in the beginning, is, I’m afraid, a bit slow. But hey, how else are you going to make a 370-page book and some supplementary writings into three three-hour movies?

Jackson filmed all three parts of “The Hobbit” in 48 frames per second, meaning at twice as many frames per second as films have been traditionally shot, with the intent that the faster film rate would allow audiences to see more detail and the movie to feel more lifelike. It both worked and didn’t. Like when TV shows first started filming in high-definition, the faster rate does allow you to see more detail — including any flaws in the props, acting or special effects. Also, it occasionally made some movements look too quick, much like early CGI, or lacking in cinematic gloss, like most soap operas.

Fans of “Lord of the Rings” who might not be as familiar with Tolkein’s books should note that “The Hobbit,” by its nature, is much lighter and whimsical than the life-or-death tone of the later trilogy (though there are still enough scary scenes and beheaded goblins to effectively disqualify this as a children’s movie). I also have a few reservations about how the next two films will pan out in pacing and material. For now, though, the first third of “The Hobbit” is another gorgeous, if not quite perfect, descent into Middle Earth.

The Hobbit: An Unexpected Journey

Cinematic risks are generally good things, and save us from theatrical ennui and blandness. The thing about risks, though, is that they can backfire — especially if they make the movie inaccessible to part of the audience.

The risk of placing most of the movie adaptation of Leo Tolstoy’s classic Russian novel on or around a theatrical stage, or at least sort of, was a diversion from typical period dramas and had artistic merit, but it rendered the already-bulky story almost impossibly confusing for those not already familiar with the source material — which, basically, means it failed at effectively adapting the book.

Anna Kerenina (Kiera Knightly) has it all in Russian aristocracy, and her life, though perhaps not bursting with excitement, is fulfilling. That life, though, is shattered when she meets and becomes smitten with Alexei Vronsky (Aaron Taylor-Johnson) while visiting her philandering brother, Stiva Oblonsky (Matthew Macfadyen). Vronsky follows her home from Moscow to St. Petersburg, where their connection quickly develops into a full-blown affair, unraveling things with her overly serious husband, Alexei Keren (Jude Law), and ultimately driving her to suicide.

Her story is parallleled by a contrasting story of love centered around Levin (Domhnall Gleeson) a rural land owner who becomes smitten with Oblonsky’s sister-in-law, Kitty (Alicia Vikander). The tumultuous passion that becomes Anna and Vronsky’s relationship is starkly compared to the constancy and fidelity that Levin shows Kitty, even in the face of initial rejection.

The acting is superb across the board, and the filmmakers take full advantage of the glitz and luxe that defined 19th-century Russian aristocracy. However, the use of the stage makes it difficult for the uninitiated viewer to keep track of exactly who is doing what where and why. I think I understand the artistic motivations to do this better now than I did when I initially wrote the review, but it still made it too difficult to be widely understandable, much less appreciated — which, unless I’m mistaken, is what movies generally go for.