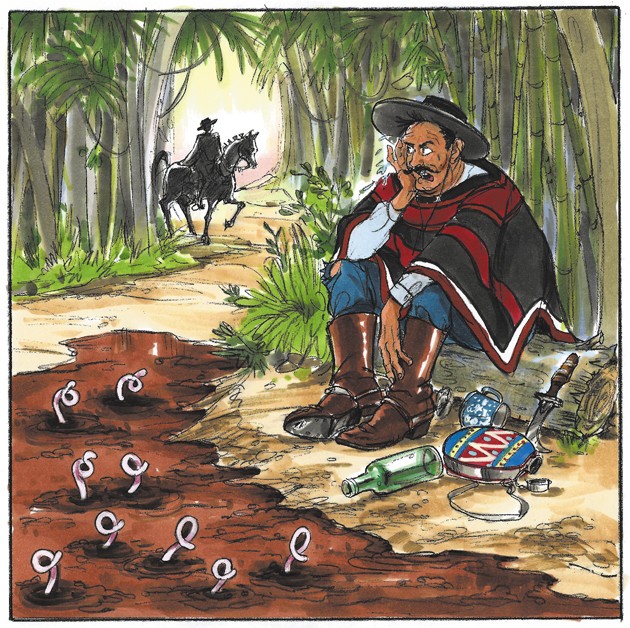 Once upon a time, Pedro de Urdemalas, one of the world’s most famous tricksters, was walking along the road, tired and hungry. Pedro de Urdemalas was sometimes rich, but now he was poor, wondering where his next meal would come from. That’s when he happened to pass by a hog farm. He laughed at the sight of all those big, fat hogs and their little, curly tails, and while he was laughing, the idea came to him.

He pulled a knife out of his pocket and cut off those hog tails, and then hurried on until he came to a muddy swamp. Moving quickly, he stuck all those tails into the mud, their ends sticking up. Then he sat down beneath a tree and began to weep.

Sure enough, in just a few minutes a man came along on horseback, and Pedro de Urdemalas could see he was very rich. He wept still harder, and the man stopped his horse and asked what was wrong.

Through his sobs Pedro de Urdemalas said, “I’ve just lost a fortune in this bog. You see those tails?”

“Poor man,” said the horseman, but what he was really thinking was that this might be his lucky day. “Friend, I’ll buy your hogs from you. My servants can dig them out of the mud. How much do you want for them?”

“Oh, I could never sell them. They are my life.”

“But now you have nothing,” said the man.

Pedro de Urdemalas looked up and sighed. “Well, then, rather than lose everything, I suppose I can sell them to you for one thousand reales.”

The man handed over the money, and Pedro thanked him and hurried away.

The stranger brought his servants to the swamp, and soon enough he discovered he had been tricked. Chasing the trickster, he understood, was useless — he had a half-day’s head start. But he decided if ever they should meet again, he would somehow get revenge.

For a good while Pedro lived well, but he never worked, so when he had spent all his money, he was broke again, and he began to think of what to do. As he walked past a cafe, he had an idea, and with his last coins, he bought a big pot and some frijoles, or beans.

He walked into the countryside, and there he dug a hole in the ground. He filled this with wood and lit it on fire, and when it had burned to coals, he placed the pot atop them, hiding all traces of the fire.

Soon the water in the pot began to boil, and he began to cook the frijoles. Pedro de Urdemalas then sat down and began to eat those beans.

Before long a stranger came along dressed in beautiful clothing, so beautiful that Pedro de Urdemalas could see he was terribly rich.

“Buenos tardes, amigo,” the stranger called as he came close, and when he saw that water boiling, he stopped and said, “What makes that pot boil?”

“Well, sir,” Pedro de Urdemalas whispered, moving closer as if he wished no one to hear. “I don’t like to tell people, but this is a magic pot. I never have to bother with fire.”

“That’s marvelous,” the stranger said. “How much would you want for that?”

“But I’ll give you whatever you wish,” the stranger said. “I must have that pot.”

“Well, if you insist,” Pedro said. “I suppose for five thousand reales I could let you have it.”

The man handed over the coins, and Pedro said, “Let me explain something to you. The pot does not enjoy changing masters, so you must sit down very quietly beside it. Don’t speak at all until I am far, far away. Otherwise, the pot may rebel and chase after me.”

With that, Pedro tiptoed away.

The man waited an hour, sitting quietly, but as he sat he began to notice the water was no longer boiling, and when he picked it up he saw that he had been cheated.

“I’ll get that fellow!” he said, but then he blushed bright red, feeling so embarrassed he knew he would never tell a soul what had happened.

Late in the day, when he was far away, Pedro decided he was safe to rest. He sat beneath a mesquite tree by the side of the road, and as he looked at the scrubby brush around him, he had an idea. He pulled a little drill out of his pocket — Pedro de Urdemalas always carried his tools — and he bored a hole into three coins. Then he hung these with string from the branches of the mesquite tree, and he hid in the brush.

An hour later, a wagon carrying a load of wares trundled past, and when the wagon masters saw those coins, they stopped and began to pluck those coins from the tree.

Pedro de Urdemalas called from the bush, “Hey, you leave my tree alone!”

“What kind of tree is this?” the wagon masters asked.

“It’s a reale tree,” said Pedro. “Twice a year it bears coins. This is just the beginning of the season.”

“How much do you want for the tree?” the men asked.

“We’ll make it worth your while,” they said.

Pedro agreed to take five thousand reales. “Two seasons’ worth,” he told the wagon masters, who were proud of their deal.

Then Pedro went on his way.

The wagon masters built homes near the tree. They pruned it. They watered it. They fed it. They did everything to encourage its growth. But forever after, nothing but mesquite beans grew on that tree.

And as for Pedro? They say he’s still traveling along.