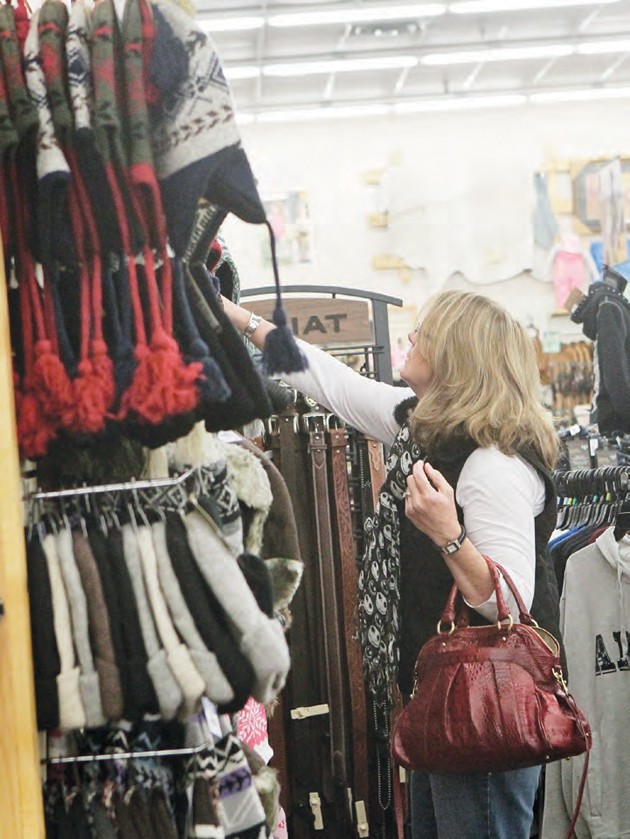 Daniele Collard looks at hats Tuesday morning at C-A-L Ranch. Retail sales rose this year, and the rise is expected to continue into the holidays.

Many stores in Tooele have seen sales trend upward throughout the year, and most are planning on those sales continuing to rise during the holiday season.

Scott Wolfe, assistant store manager at C-A-L Ranch in Tooele, said sales at his store are up about 5 percent from last year.

“At this point we’re only up 5 percent, but during the holidays is when we sell the most stuff, so we expect that percentage to rise,” he said. “At this point in time, our clothing department is heads above the rest of the departments in terms of percentage of what we’ll make off it.”

Marie Curtis, store manager at C-A-L Ranch, said once Black Friday hits, she expects sales to increase through the holidays, specifically on weather-related items such as boots, hats, gloves, snow shovels and heated water tanks. She said the items that will drive the store’s holiday sales will be items that are deeply discounted, like the Black Friday special they have on tool sets that are usually around $25. The sets will be under $10.

Curtis said because the store rotates its products with the seasons, there usually aren’t any specific items they can’t sell.

“We switch stuff out for every season, so the economy doesn’t effect us much,” Curtis said. “Our feed is always a constant seller, but in the winter its ice melt and in the summer its lawn and garden stuff.”

Wolfe said C-A-L Ranch’s sales have been on a continuous upward trend over the last couple of years.

“I believe we’re up from last year,” she said. “I’m not sure on the percentage, but I know that sales have continued to increase. People are buying a lot of toys right now because if they buy $100 worth of toys, they’ll get 10 percent off through Christmas.”

Besides toys, Canning said laundry products, paper products and pet products are all big sellers around the holidays.

“A lot of my products are cheaper than at stores like Walmart,” she said.

Rich Israelsen, chief operating officer for DownEast Clothing, said since the DownEast store in Tooele opened in October, the store has been performing very well. He expects this trend to continue through the holidays.

“We feel there’s been great response from Tooele and we look forward to a very successful Christmas season,” he said. “We’re excited about our sweater line because they make great Christmas gifts. Our sweaters and denim jeans will be strong performers for us this year.”

Israelsen said even though the economy looks grim in some places, DownEast hasn’t been affected because it offers name-brand clothing at a discounted rate.

“People like to shop good opportunities, and our type of store offers many items at a discounted price,” he said. “Other retailers have things that get up prices of hundreds of dollars, but that’s not our product mix.”

Wayne Berry, second assistant store manager at Big 5 Sporting Goods in Tooele, said so far this year the store is doing great when it comes to sales.

“We’re doing better than in past years,” he said. “Our shoe department is doing excellent. The shoe department always does well, but we’ve been selling a lot more boots lately.”

Berry said because of the snow over the last week, the winter sports department has also seen a slight increase in sales.

Store manager Jesse Braithwaite expects the holiday season to be better this year solely because there is an extra week between Thanksgiving and Christmas this year.

“Because of the way the calendar falls with the leap year this year it should benefit us because we have more time from Thanksgiving to Christmas than usual,” he said. “That alone will help sales. Plus, last year was horrible weather [no snow]. If we get more snow, then we should do better. Snow really makes a difference when it comes to our sales.”

Braithwaite said this year he expects archery to be a bigger seller for the holidays because Big 5 has expanded its archery department and now offers shoppers more options.

“There’s a lot more archery to offer, but I’ve noticed most departments seem to be stronger lately than they have been as we approach the holidays,” he said.

Lori Showell, store manager at candy store Sweet Lizzie’s in Tooele, said sales this year have remained steady compared to past years. She expects sales over the holidays to increase, at least by a small percentage.

Right now we’re staying steady and we expect sales to be higher next year than this year,” she said. “Sales were good last year, but I expect them to go up.”

However, at Depot Home Furniture Warehouse, owner Teresa McNeill told a different story. She said things are going OK and she’s holding her own considering the nation is in the middle of a bad economy, but her sales have gone down 2 percent in the last year.

“It’s been tough, but I’m still in business and that’s a good sign,” she said. “I’d love to be able to hire employees and help with the local economy.”

McNeill hopes that next year will be a better, but she is worried that it might not be.

“I don’t think people are really willing to spend their income right now,” she said. “They don’t have a lot of discretionary income. All their money is budgeted to certain things. It’s earmarked for the necessities of life.”

McNeill said she doesn’t think people are more willing to spend money on groceries and clothing, but they do it because they have to.

“We have to feed our families and keep them warm,” she said. “We have to save all of our money for gas and groceries because prices have really gone up.”