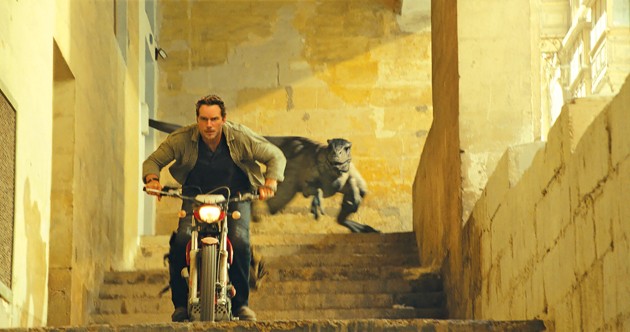 June 14, 2022
Hopefully ‘Dominion’ is the end of the Jurassic legacy

Have we finally seen the end of the Jurassic period? Or will the “Jurassic World” movies never go extinct?

That most likely depends on what our wallets have to say about the matter. Personally, it’s hard for my love of the Jurassic movies to extend much beyond Steven Spielberg’s first film. Clearly, I’m in the minority though. That’s my disclaimer.

“Dominion” places us four years after the events of “Fallen Kingdom.” Dinosaurs have been roaming free and causing havoc all over the world since a little girl in that film decided to release the dinosaurs instead of letting them suffocate in some rich guy’s basement.

You’d think the threat of having dinosaurs devastate the earth would be the main obstacle of “Dominion” — like destroying ecosystems, causing the mass extinction of animals or eating innocent civilians — but you’d be wrong of course; the villain is actually another greedy corporation looking to exploit the dinosaurs’ DNA for global control. Dinosaurs would much rather live peaceably as they gradually dwindle our populations.

Owen Grady, played by Chris Pratt, and Claire Dearing, played by Bryce Dallas Howard, find themselves in the middle of all of this. When Owen’s not herding dinosaurs on the plains, he’s caring for his adopted daughter, Maisie, played by Isabella Sermon, whom he kidnapped.

And when Claire’s not fatally wounding security guards by rescuing a single baby dinosaur, she’s also caring for her kidnapped/adopted daughter, Maisie. According to the other characters though, Owen and Claire have an ambiguous relationship.

Things take a turn for the worse when Maisie and a baby velociraptor are captured by the corporation BioSyn. It’s up to Owen and Claire along with a few other familiar faces to rescue them and find out what BioSyn is really up to.

The plot holes of “Dominion” are as gaping as a T-rex’s jaw, but I guess that is in a world already dominated by the theme that the life of a single dinosaur is worth more than the lives of thousands of people.

Hardly a single line of logic is found throughout its runtime. Humans can outrun velociraptors on rooftops; getting rid of incriminating evidence is as easy as dragging a document on your desktop to a trash bin; and dinosaurs are able to understand empathy.

I’ve always been under the opinion to suspend your disbelief when it comes to movies, but there comes a point when it becomes outright ridiculous.

And what happened to the special effects this time around? There were instances where the 1993 film had better special effects than this one. I guess it’s hard to budget them at a $185 million production value.

However, if you are a “Jurassic” fan, there are parts of this movie you will enjoy.

The reappearance of some of the original characters can be fun at times, especially when it pays homage to the original film. If there’s a selling point for “Dominion,” it’s them.

I am definitely biased when it comes to the Jurassic World movies, having reviewed the previous film in this newspaper four years ago and giving it an abominable review then.

So maybe you will take this review with a grain of salt. If not bogged down by the details, you could probably find the film entertaining as a whole, but to me the details matter.

I’m being generous in giving “Jurassic World: Dominion” a 4 out of 10. The film is rated PG-13 for intense sequences of action, some violence, and language.