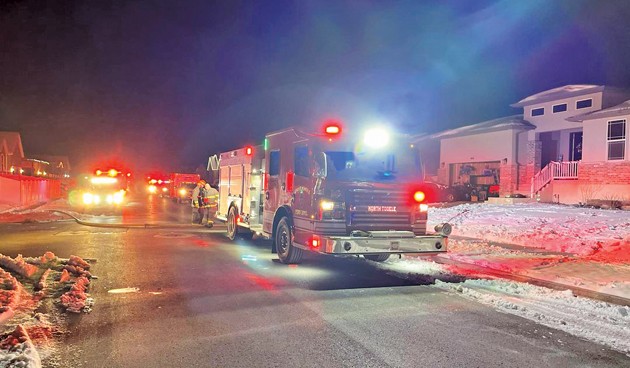 A fire near Elizabeth Street and Fireside Lane in Stansbury Park over the weekend cause the death of two dogs.

A fire in a Stansbury home over the weekend caused extensive damage and two family dogs were killed.

The fire started in the area of Elizabeth Street and Fireside Lane around 9 p.m. on Dec. 2, according to Jon Smith, North Tooele Fire District’s public information officer.

Homeowners first noticed the fire when they arrived home that evening to hear their smoke detectors going off from outside their home.

“The family was able to hear the smoke detectors from outside the home. It’s good they had working smoke detectors, so they didn’t go inside the house and put themselves in harm’s way,” Smith said.

When firefighters arrived on scene, they began fighting the fire that they believe began in the kitchen. They were able to extinguish the flames almost immediately, Smith said.

The fire caused a significant amount of smoke damage and firefighters found two family dogs who had died in the home.

Along with North Tooele Fire District, Grantsville firefighters, officers from the Tooele County Sheriff’s Office, and a Utah Department of Natural Resources officer were on scene.

Crews were on scene until around 11 p.m.

The fire caused significant damage to the home.

No other injuries were reported.