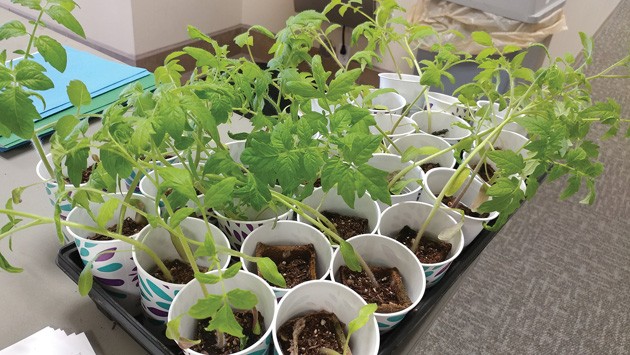 Soon it will be time to start seeds for this year’s garden.

March 1, 2018
How to successfully start garden seeds for spring

I rely on several sources for good gardening information. Because it’s impossible to memorize the vast body of knowledge related to horticulture, I have a set of references, experts and publications, and keep them accessible.

While I use such things as publications from the USU Extension, the “Sunset Western Garden Book” and some key gardening websites, one of my “go-to” tools may surprise you — Johnny’s Seeds catalog. It’s a win-win. Johnny’s gets my attention as I look up information and see various long term and new varieties of plants. I enjoy some great photography and learn successful cultivation of various crops.

I get emails from Johnny’s as well, and that is where today’s topic comes in. Because Johnny’s trials many new varieties, it does a lot of seed starting, transplanting, hardening and placing seedlings in trial gardens. A recent article by Johnny’s described the main tools and approaches used to start seeds. It will only be a few short weeks before it’s time to get going on cool weather varieties. Without further ado, here’s how this major grower approaches starting seeds.

There are three main systems that are readily available to smaller growers and gardeners. These are plastic trays and cell flats, biodegradable pots, and soil blocks. Each of these has pros and cons.

Molded plastic seed starting trays are part of a standardized system. They are commonly called 1020 trays in reference to their approximate size of 10 by 20 inches. The trays, available in various configurations, can slip into handling trays that may have slots for water drainage, or be leak-proof, or be an open mesh or grid. Covers and domes are also part of the system.

What you may be most familiar with in this system is a cell or plug flat. They come in various amounts of cells in each 1020 tray, and are identified by the cell quantity. Common sizes for veggies are 50s, 72s, 128s and 200s. The cells are squarish and close together to allow the greatest amount of plants to fit in your seed starting area.

There are even cell flats for larger crops, with 24 or 38 plants per 1020 tray. The cells are not only larger, but round in shape, allowing for bigger root balls and more top (canopy) growth.

Another option in this system is the 20-row seed flat. These have 20 channels where seed starting medium is placed and seeds are sown in the row, allowed to germinate and grow two to four leaves, and then “potted up” to a larger pot or cell.

The 1020 system is appealing for several reasons. Economics are good, the trays are easy to fill and plant, and trays can be moved around readily. The trays and accessories are usable for several seasons — if they are not stored in direct sunlight. However, they should be disinfected with a peroxide bleach solution each year to diminish disease problems. Also, with plastic trays, there tends to be more transplant shock as roots grow right up and along the plastic, and are exposed when the plant is removed from the tray.

Johnny’s uses the following variety-specific approaches when using plastic trays either in the greenhouse or under growing lights.

Lettuce is seeded into 200-cell flats, at the rate of two to four seeds per cell. The trays are covered with vented plastic domes, with the domes being removed when germination occurs. The lettuce is thinned, with scissors, to one seedling per cell.

Tomatoes and peppers are started in 20-row flats and covered with plastic lids, and set on heating mats. When the seedlings emerge, the lids are removed, with the flats staying on the mats until full germination has occurred. When the first leaves (cotyledons) are mature, the seedlings are transplanted into 50-cell flats.

As for melons, pumpkins, squash, watermelons, and cucumbers (cucurbits), they must be direct seeded into 50-cell flats. Since they don’t transplant well, two seeds are sown per cell, and then scissor-thinned to the most robust plant.

For those of you who like to start your own flowers, Johnny’s advises that you can use 20-row seedling flats and “bump” them up to 38-cell flats after they get going.

Another seed starting and transplant system is biodegradable pots. Seeds are planted directly in starting medium in the pots, and the entire container can be planted in the garden later. The pot will break down allowing water and nutrients to access the plant and roots to grow out into the garden soil.

These pots are readily available in retail locations, and they are popular for their convenience. This approach also greatly reduces transplant shock, and there is virtually no waste. Downsides include they need to be purchased each year, they aren’t as easy to handle and transport, and they are not as space efficient when it comes to seed starting space. Also, plants can become root-bound if left in the pots too long.

That brings us to soil blocks — cubes of moistened potting mix that have been formed using a soil block maker. They are more labor intensive, and it takes an initial investment to buy the gear to make the blocks. However, the resulting cubes are easy to use, give dependable results, and plants will grow quickly in them. Economics are good over time. A quality set of block makers (Ladbrooke has a good reputation) will last a long time, so the cost of ownership will be quite low over time. The more you use them, the lower cost per block.

It does take some type of trays to hold, handle and water them. The blocks themselves are formed in standard sizes, starting with small, 3/4-inch mini-blocks, which are used for germination, much like 20 row seed flats. These smaller cubes are inserted in larger cubes, such as 2-inch square or 4-inch square blocks that have a formed depression in them for a smaller block to fit in.

The seedlings grow directly in the block of the growing medium, and when the root tips of the seedlings reach the side, they become “air pruned,” resulting in robust secondary root formation throughout the block. There is virtually no transplant shock when the seedlings are placed in the garden plot. Another advantage is that soil fertility and organic material is enhanced over time as blocks of growing medium are used from season to season.

So there are the basics of seed starting as outlined by a major horticultural company. If you’d like more detailed information from Johnny’s, there is a great seed-starting date calculator located at johnnyseeds.com/growers-library/seed-planting-schedule-calculator.html. Simply enter our average last frost date of May 7 and get a schedule of starting dates for both popular veggies and flowers. If you’d like more details for successful seed starting, including diagrams and pictures, visit johnnyseeds.com/growers-library/tools-supplies/seed-starting-transplanting-guidelines-tech-sheet.html.

May this be your best year yet for starting your own seeds, and trying some new varieties!