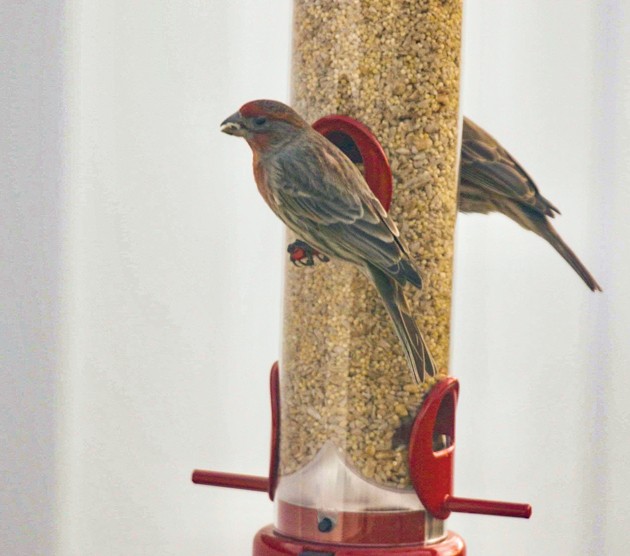 A house finch stops at the bird feeder behind the writer's home. (Courtesy of Patty Howe)

If you’re awake — and not already to work or school — when the sun comes up right now, you’re likely to be greeted by a very spring-like cacophony.

Last week, while letting the dogs into the yard for some fetch, I really noticed the birds for the first time since winter began. I could hear dozens of them in nearby yards and trees, singing up a storm.

It was also the perfect reminder that I’ve been looking to buy some bird feeders and seed, to see what I could entice onto my property. A hummingbird feeder the year before had been a success, and I was ready to expand the feathered visitors to my home in the city.

When I was growing up, we typically always had bird feeders in the backyard. Tube feeders, platform feeders, suet cages and the like were first put in a nearby tree, then relocated to a 4-inch PVC “tree” to (effectively and amusingly) deter the fat and plentiful gray squirrels.

I’d generally help by filling and cleaning the feeders, which was a chore I never minded. It was usually easy and the reward was more than worth it — we had a huge diversity of birds, with everything from chickadees and dark-eyed juncos to Baltimore orioles and rose-breasted grosbeaks.

Sometimes the songbirds eating at the feeders would also bring in avian interlopers of a different type, with occasional visits from Cooper’s or sharp-shinned hawks.

On more than one occasion, the feeders brought in a hungry black bear, too, who would generally take one with them. We’d usually find the empty and mangled feeder a ways into the woods behind the house weeks or months later.

With no concerns of inviting a curious black bear into Rose Park, I decided last Friday would be the day I’d finally purchase a pair of feeders for the yard. After a couple visits to home improvement stores with underwhelming selections, I found myself down in Holladay at Wild Birds Unlimited.

I’d been to Wild Birds Unlimited stores in New York before and knew they had a good, if pricey, selection of feeders and seed. I picked out a pair of feeders, two bags of seed and a suet cake, having already purchased a metal shepherd’s crook to hang them from.

After recovering a bit from the sticker shock of the final cost of all of the supplies, I loaded up the car, excited to get back to feeding the local birds. (In fortuitous timing, my wife — who doesn’t share the same level of excitement for feeding birds — was out of town for work during my bird seed spending bonanza.)

I quickly had the feeders set up in the backyard, after convincing my dogs the peanut butter suet cake was not, in fact, a giant dog treat. The feeders were still shiny and new, the birds could be heard nearby and I was excited to see my first new feathered friend come in for a snack.

I waited. And waited. I knew, logically, it would take a while for birds to take an interest in the new feeders but I still waited at my back window for ages so I could get a glimpse of the first bird.

The first day, there was nothing.

Undaunted, I kept half an eye on the feeders throughout the following day. The only visitor was a fox squirrel, who left little handprints in the suet cake. Still, I waited.

On Sunday and Monday, there was still no sign of any birds on the feeders. When I let the dogs out in the morning, the cheerful bird songs suddenly seemed to be taunting me. It sounded like there were dozens of birds on my block alone, but none of them were interested in my offerings.

My parents arrived Tuesday for a springtime visit from New York and I bemoaned the lack of birds on the shiny, pristine feeders in the backyard. The suet cake was more than half gone at this point, the smug squirrel no doubt pleased with himself.

While we were in the backyard Tuesday afternoon, my mom finally spotted the bold, pioneering bird willing to break the new feeder in. A single house finch stopped, took some seed and flew away.

It felt like a much bigger deal than it should have but after dropping a not-insignificant amount on feeders and seed, it was rewarding to finally have a taker. I was thrilled to have the single finch and later the same day, a pair of house finches also partook in the feeders.

Hopefully, it’s a sign of things to come. I’m already considering more options for the feeder situation — perhaps a platform feeder and some sunflower seeds.

It’s nice to have the chance to feed some wildlife. Of equal personal satisfaction, it’s a bit of a taste of my childhood home to have bird feeders again.

Now, I just need to do something about that dang squirrel. Anyone have any 4-inch PVC laying around?