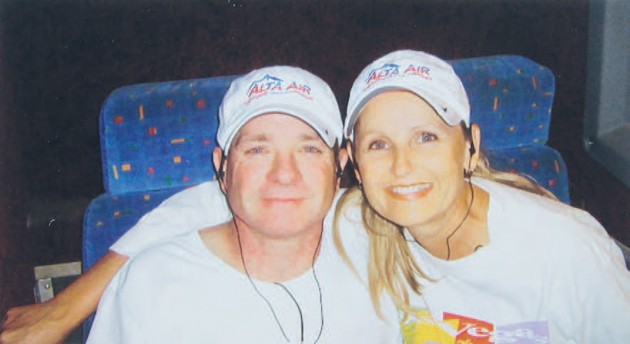 Ken and Jolene Maughan of Stansbury Park will be among 50 runners competing in the Salt Flats 100 on Friday and Saturday. Jolene has run 30 marathons and Ken 25 marathons, and the pair have logged two 50-mile runs in preparation for the grueling race on the Utah-Nevada border.

Endurance runners in pursuit of new challenges will arrive in Tooele County this week to conquer one of the world’s most intimidating landscapes — the Bonneville Salt Flats.

Runners from as far away as the East Coast, Hawaii and even Canada have signed up to be the first 50 individuals to attempt the inaugural Salt Flats 100, a 100-mile, 36-hour race through the same mudflats and scrubland that doomed the ill-fated Donner Party in the 1860s.

“This is a significant adventure,” Vince Romney, the race’s director, said. “No matter how you look at it.”

The course will cross 10 miles of the Bonneville Speedway, pass historical relics, traverse several of the Salt Flat’s floating islands and cross into Nevada before the two-day event’s end. But the most difficult aspect of the race, according to Romney, who tested a similar course in the area last year, is the mental challenge of running, even through the night, in such a remote location.

“The concept of having quick access to civilization goes away out there,” he said.

But it will be the distance, not the terrain or the speed at which they run, that will challenge athletes most in this race, according to Romney.

“Anything after 60 miles hurts,” he said, “so you just have to accept it and keep running.”

The course has attracted a group of runners who are especially interested in running in unique landscapes such as the Salt Flats, including one Jay Aldrus, who holds three world records and intends to finish the 100-mile course in 15 hours. In addition to the runners, the event will also require some 70 organizers and volunteers to keep tabs on each runner and man aid stations.

Endurance runners and their supporters aren’t the only ones eyeing the new race. The BLM will also evaluate the event’s success and it’s impact on the surrounding environment. Should it gain a nod of approval, Romney said he hopes to expand next year’s race to include as many as 250 runners.

The race will begin at the Bonneville Speedway at 7 a.m. Friday. More information is available at saltflats100.com.