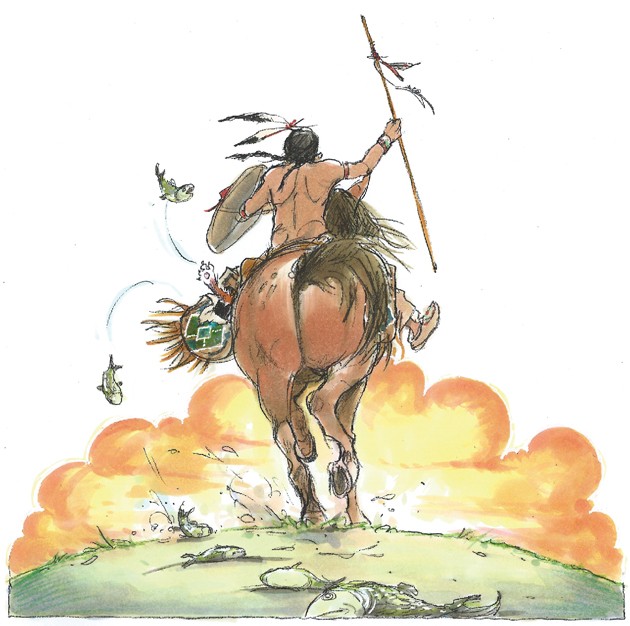 One hot day, Fox was hunting, but he’d had no luck. As he walked along the dirty road, his stomach was growling so loudly that he could barely hear the summer wind. But suddenly he heard a song so loud that he could hear it over his growling stomach.

“Is that Wren singing?” Fox asked himself, and he crept behind a bush to watch and wait.

Suddenly, he saw a heron feather, and Fox prepared himself to leap out to grab Heron. But as he watched, the feather rose higher and higher. Soon he saw there was no bird attached to the feather. Rather, the feather was attached to a headdress worn by a tall, strong man riding a horse.

Fox began to tremble. “If that man sees me, he’ll shoot me with his arrows,” he said. He curled up into a tiny ball to hide.

The horse and the man came closer and closer. Fox could hear the words the man sang — a song full of bravado and boasting.

“I am Heron Feather, the bravest and most handsome young man. No one is stronger or smarter. And no one is a better fisherman! My love will surely wish to marry me.”

Now Fox understood. Heron Feather was heading to see the girl of his dreams, and his clothing, his horse and his song were meant to impress her. But most impressive of all to Fox was the bag Heron Feather carried, the bag that was attached to his blanket roll.

Fox sniffed the air. Yes, indeed! The bag was bursting with fresh fish.

At that moment, Fox’s fear left him. He had to have those fish!

Fox was so hungry that he knew he must have that bag!

He ran through the woods, parallel to the path, never letting Heron Feather out of his sight. He ran as fast as he could until he was ahead of the horse. Then he lay down in the road, closed his eyes, opened his mouth and let his tongue hang out.

He waited until he heard Heron Feather’s song coming close.

“Quiet, stomach!” he hissed to his growling stomach, and sure enough, as Heron Feather drew closer, he noticed Fox lying in the road.

“Well, look at that!” he laughed. “What a fine fox this fellow is! My love will be impressed if I bring her his coat!”

Heron Feather halted and leaped from his horse. He picked up a stick in the road and prodded Fox. Fox didn’t move a single muscle.

“Hmm,” Heron Feather said, and he bent down and studied Fox, touching his pelt. “Fine, indeed. I shall take him with me,” and he turned and unlaced his bag — the bag with all those delicious fish.

“When my love sees this fox,” Heron Feather crooned, “she’ll know how wonderful I am. Not only will she know I’m a fine fisherman; she’ll think I’m a wonderful hunter.”

Truthfully, Heron Feather had not caught those fish — he had bought them from a friend of his. But he was a prideful young man, and truth didn’t matter to him.

So he picked up Fox and dropped him into the bag. Then he closed the bag again, mounted his horse and set off.

He began to sing about what a fine hunter he was: “The finest hunter in the land, Heron Feather! The perfect husband he shall be!”

For a few minutes, Fox simply listened. He contained himself — though he thought about laughing out loud. But after he was certain Heron Feather was paying no attention, he began to chew at the side of the bag. He chewed and he chewed until he had made a hole big enough. Then, one by one, he dropped the fish out of the bag.

When all the fish were gone, he chewed the bag a little bit more, until the hole was big enough that he could leap out himself.

Fox gorged himself on all those fish. “Oh, what a fine fellow I am!” Fox sang. “I’ve outwitted Heron Feather!”

Heron Feather, meanwhile, rode all the way to his beloved’s lodge, and there he stopped.

He began to sing: “It is Heron Feather, finest fisherman and finest hunter in the land, I have come with gifts for all!”

Soon everyone had gathered around, including the beautiful Swaying Reed and her mother.

“Let us see your bounty,” Swaying Reed’s mother said, and Heron Feather reached for his bag.

“You shall see the glorious gifts of Heron Feather,” he sang, and he reached for his bag.

The moment he touched it, he knew something was wrong.

He turned and stared. There was a great big hole in the bottom of the empty bag. For the first time that day, he stopped singing. He looked down at the beautiful maiden and her mother, and he blushed.

“So much for your boastful words!” everyone began to laugh.

Humiliated, Heron Feather just turned around and rode away. This time he was not singing a song, but Fox certainly was.