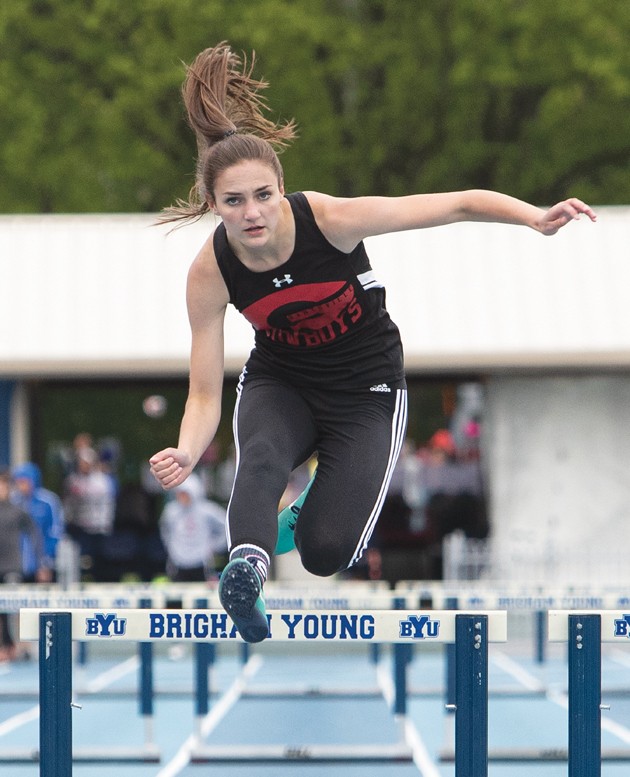 When Erin Hurst joined the Grantsville High track and field team as a junior in the spring of 2019, she didn’t know what event she would compete in, let alone how far the sport would take her.

She picked the hurdles on a whim, and it turned out to be a better choice than she ever could have imagined. This month, Hurst signed a national Letter-of-Intent to run at Dixie State University in St. George, becoming a member of the Trailblazers’ first-ever recruiting class as an NCAA Division I school.

“If you would have asked me about a year and a half ago, I would have had no clue,” Hurst said of earning a full-tuition scholarship to DSU. “By the end of last year, I kind of knew that I wanted to do it, but I was hoping that I would be good enough compared to all of my competition that had been doing track for all four years of high school.”

Hurst had always wanted to run track, but circumstances wouldn’t allow it. She attended high school in Italy for two years while her father worked the construction of a temple in Rome for The Church of Jesus Christ of Latter-day Saints, and the American Overseas School of Rome didn’t have a track. Additionally, the school’s track and field season was at the same time as the girls soccer season, which forced her to pick between the two. When she and her family returned to Grantsville for her junior year, she was finally able to participate in both sports.

“I knew I wanted to do track, because my older sister did it and my parents did it, but I just never did it because soccer was my No. 1 sport at the time,” Hurst said. “During soccer and basketball, I knew I was fast and I knew I was decent at running, so that’s one of the reasons I tried out track.”

Hurst said her experience on the soccer field helped her resilience as she tried to get the hang of her new sport.

“As a defender, I really have no fear of running into trouble,” she said. “That really helped with the hurdles, because soccer helped me not to be scared of running into people or getting beat up. That kept me going and getting up after I fell down.”

While she came into her junior season with no hurdling experience, Hurst took to the event like a duck takes to water. By the end of the season, she had established herself among the elite hurdlers in Class 3A, winning the Region 13 championship in the 300-meter hurdles with a personal-best time of 46.88 seconds before finishing fifth at the Class 3A state championship meet. She also set a personal record of 15.72 in the qualifying heats of the 100 hurdles at state and eventually finished fourth.

“We know that she’s still kind of working at hurdling, so we felt like with her speed, she’d be a good candidate for coming down to Dixie State,” said DSU assistant coach Dace Goulding, who guides the Trailblazers’ sprinters, hurdlers and relays. “I think that once she can start working year-round, get in the weight room and do some next-level workouts and conditioning — early season and build a base — I’m real excited about where she could be, not just this year but the next couple years as she gets stronger.”

Hurst admitted that she faced a lot of challenges when she first stepped on the track, and her success has caught her by surprise.

“I did hurdles because that’s what my older sister did and my dad also did that, and then one of my friends was like, ‘just do hurdles, it’s fine,’” she said. “Going into that, I was really timid and scared to go over the hurdles because I’d never done anything like that, but I just wanted to at least be on the team, so I tried it out.

When her senior season was canceled because of the COVID-19 pandemic, Hurst was devastated to lose the opportunity to further improve her times. However, she was still afforded the opportunity to compete for her club team at Provo-based Gold Medal Athletics, where University of Utah-bound Tooele High graduate Makenna McCloy was among her teammates. Hurst made the most of that chance, recording a personal-best time of 15.55 seconds in the 100 hurdles during the Gold Medal Club Time Trial in May.

“It was really the behind-the-scenes things that no one knows about that helped me progress such as weightlifting and intense two-hour training sessions with my club team,” she said. “It’s like I eat, breathe, and sleep track. I think that it’s easy for people to see athletes up on the podium and not realize the hard work put in and sacrifice it took to get up there.

“Anyone can have a goal, but it all depends on how bad you want it and you’re willing to work for it. I have sacrificed a lot of time, holidays, and social events for track, but I wouldn’t have it any other way.”

Besides competing as a member of Dixie State’s track and field team as the Trailblazers make the jump from Division II, Hurst is also looking forward to studying exercise science at DSU. She plans to become an athletic trainer — another thing she couldn’t have imagined before she started high school.

“Before high school, I wasn’t into sports at all — I really liked music, drawing and reading,” she said. “In high school, I kind of transitioned into athletics, and it’s been an instant passion of mine. I really want to stay close to sports, so doing athletic training would be good for me.”