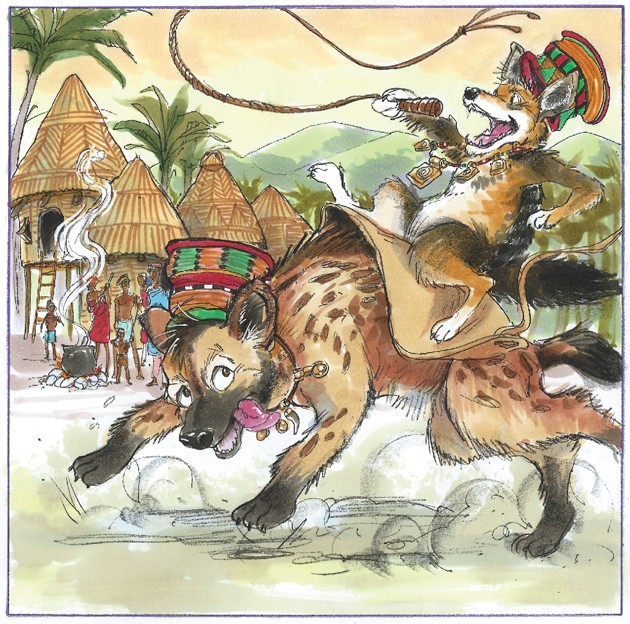 Once upon a time, Jackal and Hyena lived near each other, and Jackal was forever asking questions — he wanted to know everything about his neighbor. But Hyena liked to keep to himself, and he tried his best to avoid answering questions. Time passed.

One day Hyena proposed marriage to the chief’s daughter. He had loved her for a long, long time. He told her tales of his strength and bravery.

“I will make a fine husband,” he promised. “I will be kind and true.”

The chief’s daughter agreed to marry him.

Hyena was overjoyed. He ran home as fast as he could, bursting with excitement, and though he planned to keep his plan a secret, before long he couldn’t help but tell a few of his friends.

Word spread quickly. Naturally, Jackal learned about the upcoming wedding. He was terribly jealous. He loved the chief’s daughter, too.

So he ran to visit her, bent down on his knees and said, “I have always loved you. Marry me! I’m cunning and wise, and I will be a grand husband!”

“I’m so sorry,” the chief’s daughter said, “I am already engaged to Hyena.”

Jackal pretended to be surprised when he heard the news. He shook his head in wonder and said, “But why? Why would such a beautiful girl marry a fat, hairy coward?”

The chief’s daughter gasped. “He’s no coward,” she said. “He’s brave and strong.”

Jackal laughed. “How funny to hear you talk of my servant that way. Why, he’s the fellow I ride like a donkey.”

It was the chief’s daughter’s turn to laugh. “You can’t fool me, Jackal,” she said.

And with that, Jackal ran home and waited in the bush until he saw Hyena trotting past. “Hello, friend,” Jackal said. “Congratulations on your good news. I’d like to offer you my services.”

Hyena stared. “Your services?” he asked.

“When you go to the kraal to see the chief’s daughter, you ought to have an attendant,” Jackal explained. “That will make you seem more important. I will act as your servant.”

Hyena could not believe his ears, but Jackal was insistent. At last he agreed it would be nice to appear at the kraal with a servant. And so they arranged to meet the next day.

When Jackal arrived at their meeting place, he was carrying a hide apron and a whip.

“What are those for?” Hyena asked.

“It’s only proper for you to appear wearing this apron, and you must carry the whip to keep order among the people,” Jackal said. “Like a good servant, naturally, I’ll carry these for you.”

They set off for the kraal. Jackal walked behind wearing the apron and carrying the whip over his shoulder.

After they had walked for an hour, Jackal began to limp, and soon he began to whimper. A few steps farther and he said, “How far is the kraal? My feet are killing me!”

“Hurry up, we’ll be there soon,” Hyena said.

But Jackal moved more and more slowly, and after a few more minutes he said, “I’m sorry, but I can’t go on. You are so strong, Hyena, won’t you carry me?”

“What?” Hyena asked. “That isn’t right. You are my servant, after all.”

“Yes, that is true,” Jackal said, “but you are the one who is strong and brave, and if you appear at the kraal without a servant, people will wonder why you have none. Just carry me a little ways, please, and when we arrive, I will impress everyone with my loyalty to you.”

Hyena thought about this, and at last he decided it could do no harm to carry Jackal a little ways.

“Go ahead, climb on my back,” Hyena said, “but when we get close, you must walk.”

Jackal quickly tossed the apron over Hyena’s back, and he climbed up and sat upon it.

They walked along for a while that way, but soon Jackal said, “We’re going rather slowly, aren’t we? Don’t you want to impress your bride-to-be? I’m sure she’d like to see you trot.”

Hyena picked up the pace, and on they traveled. As they did, Jackal raised the whip in the air, and suddenly he struck Hyena with the whip.

“What are you doing?” Hyena yelped. “Why have you struck me?”

“I see the kraal ahead,” Jackal said. “I was only trying to prove to everyone that you never flinch, not even in the face of pain. Now show your woman how strong you are. Gallop!”

Hyena began to run faster and faster, and Jackal whipped him again and again. Each time he did, Hyena held his tongue. He did not wail or cry.

Jackal slipped off Hyena’s back and bowed to the chief’s daughter.

At once, Hyena understood. He had been tricked.

He quietly slipped away. Ever since that day, Hyena slinks quietly around, keeping his distance from everyone.