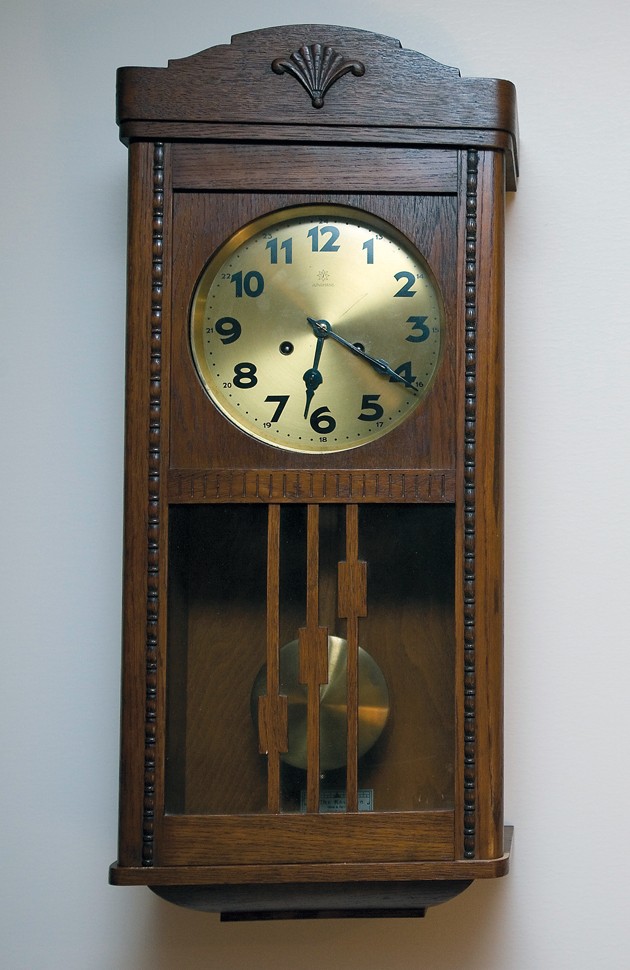 A family keepsake from Denmark, this Junghans Wall Clock traveled a long way to remind the editor of the importance of time and family.

There perhaps is nothing more personal, yet so universal, than losing your last living parent to either illness or time. So I’ll bet any good money the next few words aren’t felt only by me.

For my Mom, who died in late March at 91 years old, it was both illness and time that brought a close to her long, good and remarkable life. It’s been four months since she died, yet my thoughts often alight upon a tender memory of her, or wonder what star she and dad are dancing around today, hand-in-hand, cheek-to-cheek, to heaven’s tempo.

From that stream of thoughts, come feelings of sadness, regret, longing — but also joy and love. And in all those feelings there is a theme that hasn’t left me since I got the call from my sister that our Mom had died: Where did the time go? I do my best to live in the moment, but somehow, it still got by me.

Now with both Mom and Dad passed, and my brother too, all that is left of the original Bern family that immigrated to America from Denmark after World War II, is my sister and me, cherished and splendid memories, an assortment of family keepsakes, boxes of old photographs …

But not just any clock. It’s a Junghans pendulum wall clock built by the German clock company between 1880 and 1900. Made of walnut and stained to a warm, chestnut brown, it emits a soothing “tick, tock” as the pendulum swings to and fro. And it chimes on the hour and half hour.

It hung on the dining room wall in my grandparents’ tiny home in Faaborg, a small, 800-year-old town on a fjord about 25 miles south of Hans Christensen Anderson’s hometown of Odense. I remember seeing the clock as a kid when we’d make the big leap across the Atlantic for vacation. It was there above us while we all sat around a long table, eating and talking (lots of both), savoring each moment because we all knew our time together would be quicker than a Scandinavian summer.

After my grandparents died in the early 1970s, the clock made its way to America, I was told, wrapped in a small rug and stuffed inside a big suitcase. It survived the 4,300-mile flight to Chicago, and then the 90 mile drive to our Michigan home on Lake Michigan. There it hung on our living room wall until 2006, when Mom downsized to a condominium after Dad died in 2005. It then followed her to an assisted living center in 2014.

But now the Junghans clock has followed me. Or rather, I have followed it. Fearful the clock would not survive being shipped from Michigan to Utah, I chose to fly home in late June and drive it back. But while there, it became clear I’d return with more than the clock. I rented a Uhaul truck to fill with my portion of the last of Mom and Dad’s keepsakes and drive across America’s great middle west on Interstate 80 back to Utah.

Before packing the Uhaul, my sister and I spent hours opening boxes that had been taped shut since Mom moved into assisted living two years ago. We also opened boxes that were filled and taped while emptying Mom’s flat after she died. When we opened them and felt the things inside, it was if they were still warm. We would lovingly hold each piece — a hand-knitted sweater, a Royal Copenhagen figurine, a painting. Some we lifted to our noses to see if any scent of Mom lingered like a late sunset. And often, tears fell.

We’re told never to place much value in material things. To love others and to be loved in return, are the true gifts in life to write on the tablets of our hearts and cherish until our last breath. Which is good advice. Everything can be suddenly lost in a house fire, a flood, a tornado, an earthquake. Or even a meteor strike, for Pete’s sake.

But those calamities are rare, so when our parents die and we are bequeathed family keepsakes, they often represent deep maternal and paternal bonds — and deep bonds to our childhood — that are hard to let go. At least for me, I can’t let go, not yet. The wounds of loss are too fresh, and the keepsakes in hand are like healing balm.

The 1,500-mile drive alone back to Utah was a salve for grief, too. The passing landscapes of Michigan, Indiana, Illinois, Iowa, Nebraska and Wyoming gave me a good 35 hours to sit quietly, reflect and let feelings of gratitude gently surface. But I wasn’t entirely alone in the Uhaul’s cab.

In the seat next to me was the Junghans clock, wrapped neatly in thick bubble wrap and an oversize pillowcase. I secured it to the seat with thin rope and the seatbelt. There it stayed the entire trip, reminding me of its presence every time I hit a hard bump, which vibrated the clock’s chime.

The clock now hangs on my living room wall, and every seven days, I take a moment to slowly wind it with its well-worn key. The process is cathartic. Each turn of the key reminds me of the ephemeral nature of time. With the time I have left on this earth, I want to use wisely. I don’t want to ask myself anymore, “Where did the time go?”