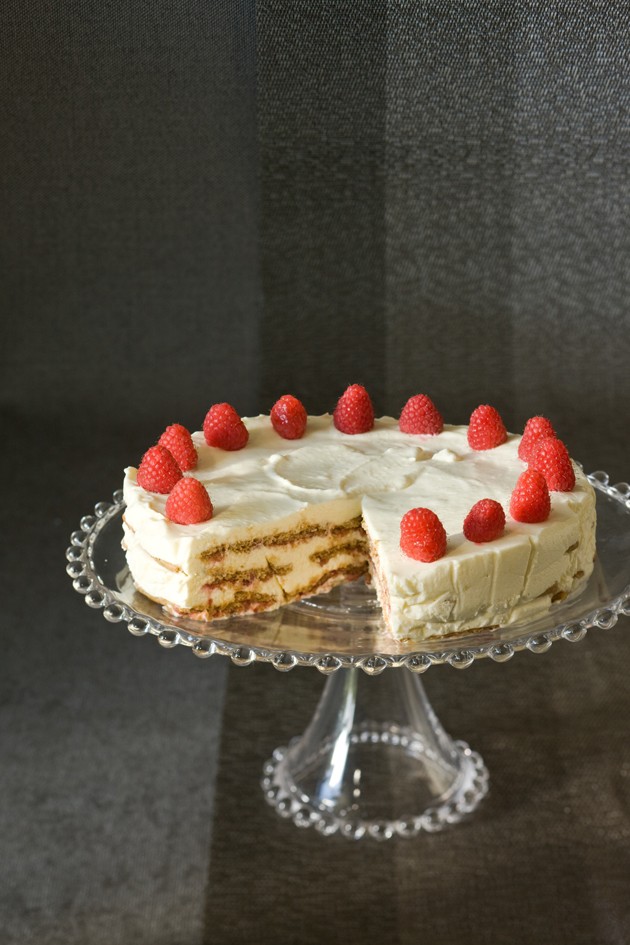 When you need a quick make-ahead dessert that’s light, cool, creamy and impressive, look no further than a jar of lemon curd and a package of cookies. We can’t say that we’ll never preheat another oven, but the transformation of a handful of ingredients into a first-class no-cook dessert has been a revelation. Multi-layered Lemon-Raspberry Icebox Cake looks like something from a Viennese pastry kitchen.

Store-bought lemon curd, a soft, thick, spreadable cream, is the very thing for making fast-and-easy desserts with lots of lemon flavor. Once called “Lemon Cheese,” the spread originated in England and was often served at tea with scones or toast. You can make your own curd, of course, but the jarred versions have stabilizers that extend the shelf life. A homemade curd should be used within a few days.

Graham crackers form the cakey layers in this dessert. Once made with unsifted wheat flour, today’s Graham crackers are made with bleached white flour. They still bear the name of the Presbyterian minister from Connecticut, the Reverend Sylvester Graham, who was an advocate for healthy living and a vegetarian diet in the first half of the 19th century. While the reverend’s extreme notions on diet (he believed that mustard and ketchup caused insanity) were greeted with skepticism by most, the invention of the cracker that bears his name is a boon to after-school snackers and icebox cake lovers everywhere.

1. Stir lemon curd with a rubber spatula in a large bowl until smooth and creamy.
2. Beat cream and sugar in another large bowl until soft peaks form. Stir about one-quarter of the whipped cream into lemon curd. Fold in remaining cream.
3. Line a 9-inch springform pan with plastic wrap. Spread a thin layer of lemon mixture on bottom of pan. Spread a thin layer of jam on 16 crackers and arrange, jam sides up, in pan. Top with about one-third of remaining lemon mixture.
4. Repeat with two more layers of jam, crackers and lemon mixture, ending with lemon mixture. Arrange raspberries around top edge.
5. Refrigerate 5 hours to overnight. Remove pan side. Gently lift cake by the plastic wrap to remove it from the pan bottom and peel away plastic wrap. Serves 14.
Recipe by Jean Kressy

Look for Relish magazine, celebrating America’s love of food, each month in the Tooele Transcript-Bulletin. For more recipes, go to relish.com